The General Motors GMT900 chassis underpinned some of the most popular trucks and SUVs in the United States from 2007-2014. The Chevrolet Tahoe & GMC Yukon were extremely popular in the full size SUV segment with millions of units sold. Their combination of interior space and towing capability made them a great choice for those who needed to move both people and cargo. We put together this 2007–2014 Chevrolet Tahoe & GMC Yukon common problems guide to help both current owners and potential owners identify potential issues. 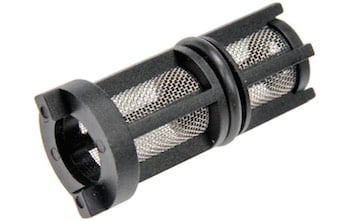 Exhaust manifold bolts are a notorious issue on LS-based 4.8L/5.3L/6.0L V8 engines. Some bolts seems to magically snap off and disappear on their own, while others wait until they are touched by an unlucky mechanic. There is some debate as to why the bolts tend to break, with some blame put upon there being too few bolts to do the job properly. If you are lucky you may be able to remove the broken bolt from the cylinder head using traditional means. But if that isn’t an option, some clever person designed a clamp that uses existing cylinder head holes to keep the exhaust manifold in place. Simply leave the broken bolt in the cylinder head, install the clamp, and tighten per the installation instructions.

A common feature on many Tahoes and Yukons is GM’s Autoride air-assisted load leveling suspension (known by its RPO code Z55). This system featured rear shock absorbers which were fitted with auxiliary air bags wrapped around the shock body. A ride height sensor monitored the amount of suspension compression and would add air to the shocks’ airbags when necessary. Air was supplied to the shocks via a frame mounted compressor. If a leak occurs in the system, the compressor will attempt to compensate by running more often, eventually burning itself out. The shocks themselves are a wear item just like normal shocks, but with the additional rubber air bag material which is susceptible to damage over time.

One of the more annoying problems with these vehicles is the tendency for the door handles to break. The handles are made from plastic and over time the mounting points can become weak after repeatedly being yanked open. This leads to the handle itself coming loose from the door. New door handles are readily available but the repair requires disassembly of the interior door panel.

Leaking heater hose connections are an annoyance at best, and an impending disaster at worst. GM chose to use plastic quick connectors in the cooling system for various reasons. Unfortunately over time those connectors are subject to massive swings in temperature, eventually make them prone to crack and leak. If you are lucky you can use a fitting disconnect tool to remove the old fitting, but more stubborn fittings may require drastic measures. Improved replacement connectors are more resistant to failure than the factory pieces.

These are just a few of the 2007–2014 Yukon & Tahoe common problems we have come across. Each truck is different and repair needs can depend on maintenance schedules, driving style, environment, and many other factors. When in doubt, simply swing by your local NAPA AutoCare location for an expert opinion.

Check out all the maintenance parts available on NAPA Online or trust one of our 17,000 NAPA AutoCare locations for routine maintenance and repairs. For more information on 2007–2014 Yukon & Tahoe common problems, chat with a knowledgeable expert at your local NAPA AUTO PARTS store.