Your vehicle’s electrical system is quite complex. Modern cars have miles of wire, multiple computers and sensors on every possible component, even the suspension can have sensors monitoring the movements. All of this puts a serious strain on the charging system. We have previously discussed the battery and how that works, but the other half of the charging system is the alternator. Let’s dig in a little deeper inside an alternator and see how it works. 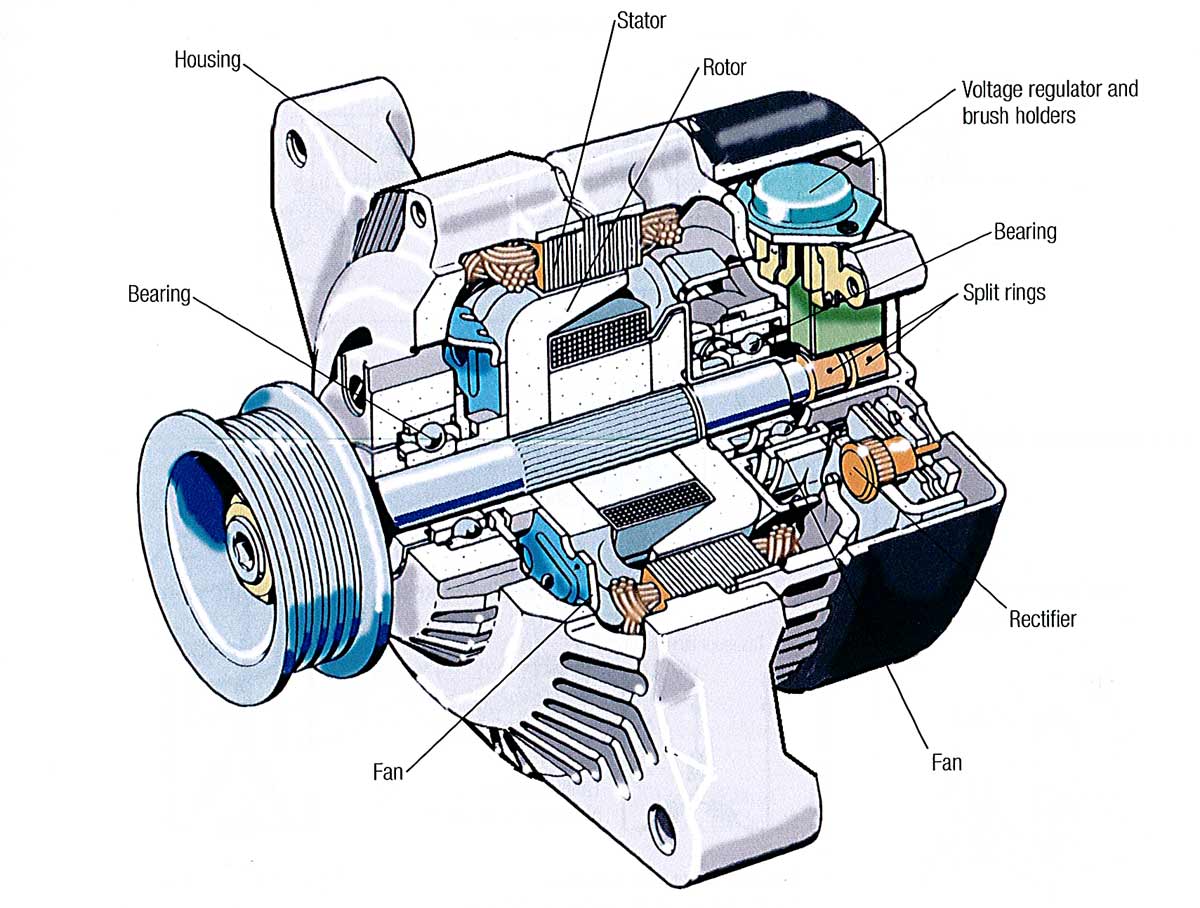 The alternator generates electricity by converting rotational mechanical energy into electrical energy. This is the same type of device used in hydro-electric and steam-turbines power generators. The alternator consists of several components—stator (armature), rotor (rotating magnetic field), and a bridge rectifier. Each has their own dedicated function.

The stationary windings of the alternator are called the stator. There are three coils mounted to the outer case of the alternator itself. Spaced 120-degrees apart, each winding generates a current, creating a 3-phase power source. The very nature of the rotating field makes this current alternating current, or AC, hence the name “alternator”.

This is the part of the alternator that spins. This is where the alternator is controlled. The center of the rotor is an iron core, with a copper wire wrapped around it. When a current is applied to the wire, a magnetic field current is produced. The field current is DC, or Direct Current, the current flows in only one direction. The field has a North and South Pole, just like any magnet. The rotor is suspended by bearings on both ends, and one end is attached to the pulley for the engine’s drive belt.

In order to control the output of the alternator, there is a regulator. This is the brain of the unit. As demand increases, the regulator increases voltage to the field wire, which in turn, produces a larger current output from the stator. The regulator monitors the field current supply, the battery voltage, and the output. Most regulators are set 14.4 volts.

Because all modern car electronics use DC current, the AC coming off the stator must be converted. This is the job of the bridge rectifier. There are 6 diodes in the rectifier. Diodes allow current to flow one way and cut off the opposite flow, which is what AC does, flow both ways. There are 2 diodes per stator winding, each controls the flow in one direction, so that the output is a steady bounce instead of a wave, emulating DC current. Alternators are very noisy in terms of the electrical signal, but most automotive components are OK with that, if not, they have special filters built in to reduce the noise.

The rest of the alternator consists of the case, bearings, and brushes. The brushes connect the spinning rotor to the wires for the regulator.

When all is well, the alternator lives a happy life, but when things go bad, they happen quickly. Because the alternator rotor spins 2-3 times as fast as the rest of the engine, heat is a big factor in alternator life. The most common issues with alternator are bearing failure, bad regulator, and bad rectifier.

If the bearings are failing, you will hear growling or whine coming the engine as it runs. Most of the accessory drives under the hood are bearing mounted, so this could be anything, but you should be able to pinpoint the sound to the component. Along with the noise, the alternator case will be very hot and the warning light on the dash might flicker occasionally. If the bearings are really bad, the belt might squeal from the strain. Once the bearings fail completely, the rotor can seize, causing a fire.

A bad regulator or rectifier cause a whole host of issues, from a dead battery to too much voltage and burned wires. If your vehicle has a voltage gauge (rather than just a light), you can monitor the actual voltage coming off the alternator. This should be 12.3-14.4 volts when the engine is running. Anything more or less represents a problem. At rest, the battery should read around 12 volts. If you don’t have a gauge, you can check the voltage with a test meter.

Maintaining and Testing Your Alternator

One of the keys to ensuring a long life for your alternator is a good battery. The two components work hand in hand. A bad battery will cause the alternator to stay on all the time, never getting a rest. This means more heat, and heat is the enemy of all electrical components. Once the diodes in the rectifier or regulator burn out, the life of the alternator is over. The same thing goes for the battery; a bad alternator can be masked by a good battery for a while, but alternator can actually cook the battery, or drain it, depending on the failure, leaving you to replace both components.

Check out all the electrical system products available on NAPA Online or trust one of our 17,000 NAPA AutoCare locations for routine maintenance and repairs. For more information on what is inside an alternator, chat with a knowledgeable expert at your local NAPA AUTO PARTS store.

alternator, battery, charging system, electrical system, what is an alternator

2 thoughts on “Alternate Source: Inside An Alternator” Leave a comment ›

NAPA Know How Blog Alternate Source: Inside An Alternator