Car batteries provide a vehicle’s life force. We rely on them to get our cars started and keep them running, to power helpful onboard accessories and even to charge electronic devices. So, how long does a car battery last? The average car battery life expectancy can be anywhere from three to five years, but the exact time any given battery needs to be changed depends on a number of factors. 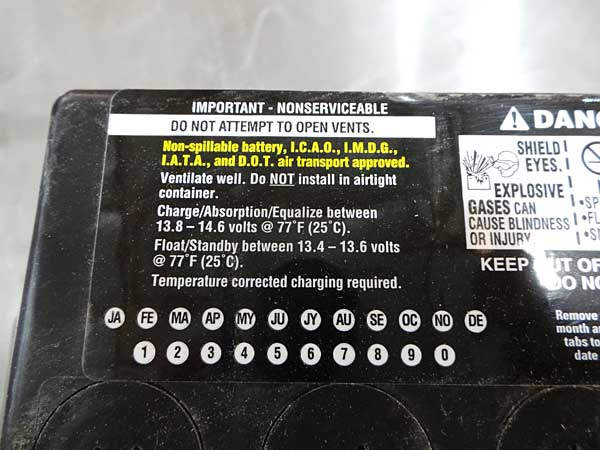 Most cars on the road today have 12-volt lead-acid batteries under the hood. There are a few variations on this, but the basics remain the same. An automotive battery is actually a group of cells in a series—6 cells producing 2.1 volts, to be exact. Each cell is made up of two types of lead plates (lead and lead-dioxide) submerged in a sulfuric acid solution and connected across to the next like plate, forming two poles—one positive and one negative.

When they are connected through a circuit, a chemical reaction takes place that moves electrons across the plates to produce an electric charge. The battery becomes discharged as electrons move from one plate to another but can be recharged by sending them back to the first. Over time, however, the chemical reactants will become used up, and it will no longer be possible to produce enough voltage for automotive needs.

The average life of a car battery is influenced by many variables, but even under perfect conditions, it will eventually degrade because of its chemical makeup. The two biggest culprits responsible for shortening a battery’s lifespan are surrounding temperature and driving habits.

As they are usually located under the hood with the engine, batteries are already subjected to high levels of heat, but in warm climates during the summer months, the extreme heat can begin to discharge the battery in as little as 48 hours. This is because heat works to evaporate liquids inside the battery and causes internal damage that ultimately shortens the lifespan.

You might have experienced difficulty starting your car in the winter, too—that’s because cold temperatures make it more difficult for the battery to produce the initial burst of energy to get the engine turned over, and the cold thickens engine oil, which doesn’t help either. However, this alone does not shorten the car battery lifespan the way heat does.

Unfortunately, climate is not a factor you have much control over. But the second important variable you do: driving habits. Stop and start driving, or driving under 20 minutes on a regular basis, uses the battery’s power without giving the alternator enough time to recharge, thus draining it to very low levels repeatedly and shortening its life expectancy.

Time for a Change

There are a number of telltale signs that will alert you when the end is near. Look out for sluggish cranking or onboard electronic components acting erratically, such as flickering headlights. Check the battery every six months or so for swelling and/or a weird smell like rotten eggs, which means there is something wrong internally and it must be changed. Some vehicles have a warning light on the dashboard to give you a heads up that something is wrong.

All batteries eventually go bad, so keep a lookout for signs when you reach the three-year mark and listen to what your car is telling you. Replacing the battery is an easy fix that prevents big headaches down the road, so it’s worth your while to stay on top of it.

Check out all of the batteries available on NAPA Online or trust one of our 17,000 NAPA AutoCare locations for routine maintenance and repairs. For more information on average car battery life, chat with a knowledgeable expert at your local NAPA AUTO PARTS store.

One thought on “The Average Car Battery Life: When Is It Time for a Change?” Leave a comment ›

NAPA Know How Blog The Average Car Battery Life: When Is It Time for a Change?