Hundreds of people are injured or killed in car accidents daily, with far more prevented thanks to cutting-edge safety equipment. Modern cars come with an anti-lock braking system (ABS), which have been available for decades as an option but only mandated recently by the NHTSA  on all new passenger vehicles sold in the United States. Understanding what is ABS and its effectiveness may influence your used car purchase decisions. Let’s take a look at this often forgotten but highly important safety system. 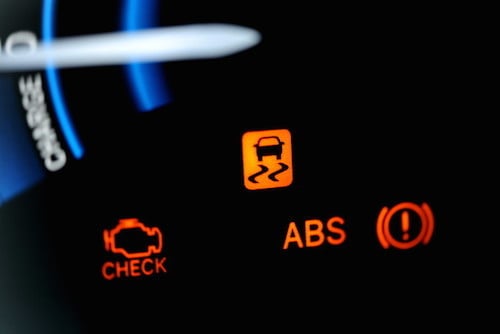 So what is ABS on a car used for? In short if makes you stop safer. The idea for ABS had been around for decades in the railroad and aircraft industries, but it wasn’t until the 1970s that ABS made its way into cars. The earliest aircraft and railroad versions were completely mechanical and very complicated. The move to computer controls helped early passenger vehicle ABS gain traction.

At its core ABS is a computer-controlled system that works with your vehicle’s brake system. Wheel sensors notify the computer module when the wheels stop rotating while the car is in a forward motion, which also means the brakes have overpowered the traction within a given wheel. A special ABS pump and valves can then control brake pressure to each wheel.  The overall function of the hydraulic braking system remains the same, but the control speed of an ABS system in car driving situations allows it to react far faster than any human.

How Does the ABS work?

Older drivers may recall from drivers education that whenever you are forced into an emergency braking situation you should pump the brakes rather than just holding them to the floor. Before ABS became  commonplace stomping on the brakes too hard in an older car would lock up all four tires likely leading to a loss of control. It was up to the driver to press and release the brake pedal in order to maintain control of the vehicle and stop safely.

ABS brakes take over the need to pump the brake pedal and put it in the control of the ABS system. In fact when using ABS the driver need only hold the brake pedal to the floor. When a tire begins to lock up under braking  the computer immediately notifies the hydraulic valve to discharge a measure of brake fluid pressure to get the wheel to begin rotating again. This process repeats itself many times a second until you lift your foot off the brake pedal or when the vehicle comes to a full stop. The wheels never stop turning thanks to the ABS brakes meaning the driver stays in control. In other words, ABS prevents the wheels from locking, while ensuring tractive contact with the road surface. Since the wheels continue to turn the driver retains the ability to steer.

How Do We Know It Will Work?


Like any system, ABS must be checked regularly to ensure it performs as expected. Fortunately, your vehicle does a self check each time the ignition is engaged. The computer promptly checks the system and if all is well, you won’t be informed.

It is when the system malfunctions when notification in the form of a warning light is prominently displayed on the dashboard. Typically, the light is illuminated if the computer detects a valve or hydraulic pump isn’t working. This does not mean you cannot drive your vehicle. You can, but you must understand that braking assistance is not available until you have your vehicle successfully serviced.

When a panic stop is required and the driver steps hard on the brake pedal the ABS will trigger. The driver will feel a pulsating or vibrating sensation from the brake pedal signaling that the system is working by squeezing and releasing the brakes hundreds of times a minute. Using ABS has little to no affect on brake pad wear.

Where Is ABS Used?

You’ll find ABS on some passenger vehicles dating to the 1990s: cars, pickup trucks, vans, and utility vehicles. Oddly some older trucks were available with ABS only on the rear axle. As of September 1, 2013, all newly built passenger vehicles must come with ABS and electronic stability control. Some motorcycles have ABS, although it isn’t required. Since March 1, 1997, the federal government began requiring new tractor-trailers and most school buses to come with ABS.

Passenger vehicles with the system will temporarily flash an ABS or anti-lock light when the ignition engages. The ABS light automatically goes off, unless there is a problem with the system. Your owner’s manual is also a place to look for that information.

An important visual check will confirm that an ABS pump is present. Lift the hood and look for the brake master cylinder. The unit will be found nearby with one or two brake lines connecting the two. You can also look behind the front wheels, which will reveal a flexible rubber brake hose connected to the brake caliper. Further, an attached wire to the speed sensor found in the hub area offers another confirmation of ABS. If your vehicle doesn’t have ABS, only the flexible brake line would be present.

How Many Lives Are Saved?

ABS, especially when working in conjunction with stability control, saves lives. The number saved annually isn’t known, but a reduction in accident severity likely is apparent, at least to drivers. When ABS is combined with modern electronic stability control (ESC) systems the driver has a much higher chance of avoiding an accident.

Your car’s ABS system is crucial, because it allows you to brake as hard as possible, while maintaining traction. You won’t notice ABS every day, but if you find yourself in an emergency situation, it could help you avoid an accident.

Check out all the brake system parts available on NAPAOnline or trust one of our 17,000 NAPA AutoCare locations for routine maintenance and repairs. For more information on what is ABS in cars, chat with a knowledgeable expert at your local NAPA Auto Parts store.

NAPA Know How Blog What Is ABS And How Does It Work?