A quick look under your vehicle’s hood will let you know there’s a lot going on. The combustion engine is complex enough, with multiple parts working together to produce the power which moves the vehicle, but there are several other systems working alongside it. Accessories and components that work in conjunction with the engine are kept in harmony by the drive belt, also called a serpentine belt. This belt is considered a consumable, and it will need to be replaced, ideally before belt wear exceeds a certain threshold. Here’s what to look for when you’re checking for belt wear in your vehicle. 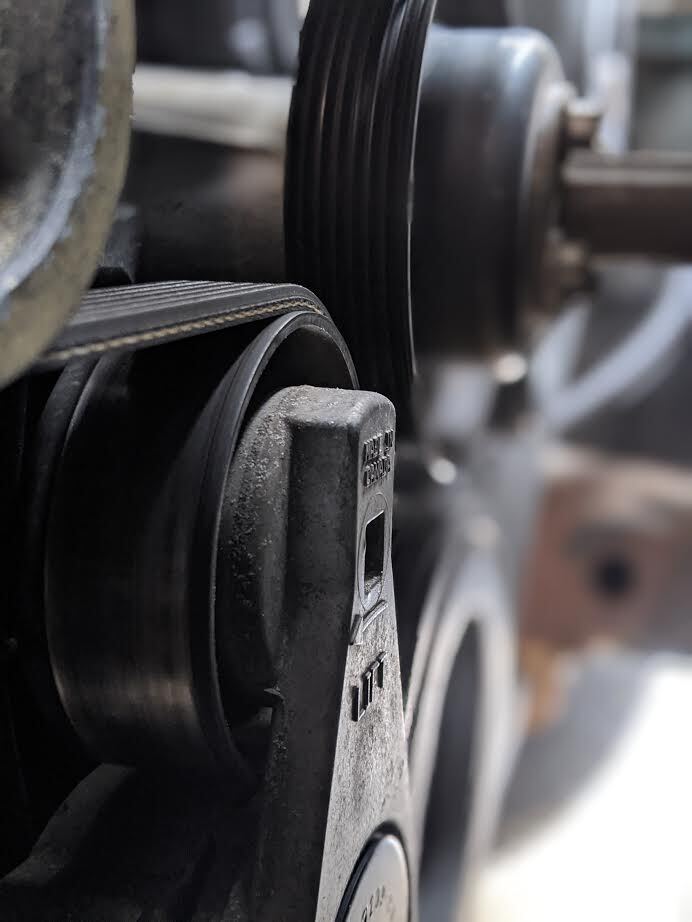 The serpentine belt can be found at the front of the engine, winding its way around components such as the A/C compressor, water pump, radiator fan, alternator, power steering pump, multiple pulleys to guide the belt and a tensioner to keep things tight. Not to be mistaken for a timing belt, which is responsible for keeping the crankshaft properly timed with the camshaft, drive belts are usually more accessible — although modern engines can get a little cramped.

Some vehicles might have two separate belts, and the placement of driven components varies from car to car. If you believe your belt may be broken or missing but you aren’t sure, consult your owner’s manual or look for a diagram showing the belt routing posted somewhere under the hood.

There are a few telltale signs that your drive belt is worn or has already failed. If you notice one or more of the components driven by the belt is acting up, you’ll want to check to see if your belt is the culprit. Has your battery died because the alternator isn’t charging it? Is your power steering or A/C not operating properly? Is your engine overheating? It’s important to note that all of these problems can be caused by issues not related to the drive belt, but the belt is easy enough to check if you notice these problems, especially if you experience issues with several of these systems at once.

The belt can break off completely, but it’s more likely that it will begin to wear, become loose and slip. Luckily, your vehicle often gives you another clue here: strange noises. You might notice a loud squealing or shorter chirps as the belt slips, hear the pulleys whine if the tension is off, or hear a brief flapping if the belt breaks.

Inspect the Belt and Replace It If Necessary

Inspecting a belt for wear isn’t difficult and can be accomplished while the belt is still on the vehicle, but this should never be done while the vehicle is running. Check the belt for cracks, fraying, missing pieces or chunks, and worn-down grooves. It may look especially dried out, which can happen as a result of all the heat and friction it faces over time. Drive belts are usually expected to last up to four or five years, or between 60,000 to 100,000 miles, but you’ll want to check your owner’s manual to confirm for your vehicle.

Since they aren’t usually difficult to change, putting on a new drive belt as part of your preventative maintenance routine is highly preferable to wearing the old one out completely and getting stranded with no steering and an overheated engine, so keep an eye out for signs of wear to avoid this fate.

Check out all the belts and hoses available on NAPA Online, or trust one of our 17,000 NAPA AutoCare locations for routine maintenance and repairs. For more information on belt wear, chat with a knowledgeable expert at your local NAPA AUTO PARTS store.

NAPA Know How Blog Belt Wear: Time for a Change?