It was the closest points battle in World of Outlaws Sprint Car Series history. After more than 70 events and a nine-month season, only two points separated Brad Sweet and ten-time series champion Donny Schatz going into the final race of the season. Starting third and finishing second with Schatz just behind him in third, Brad Sweet and the Kasey Kahne Racing NAPA AUTO PARTS team earned the 2019 championship in spectacular fashion – by a mere four points. 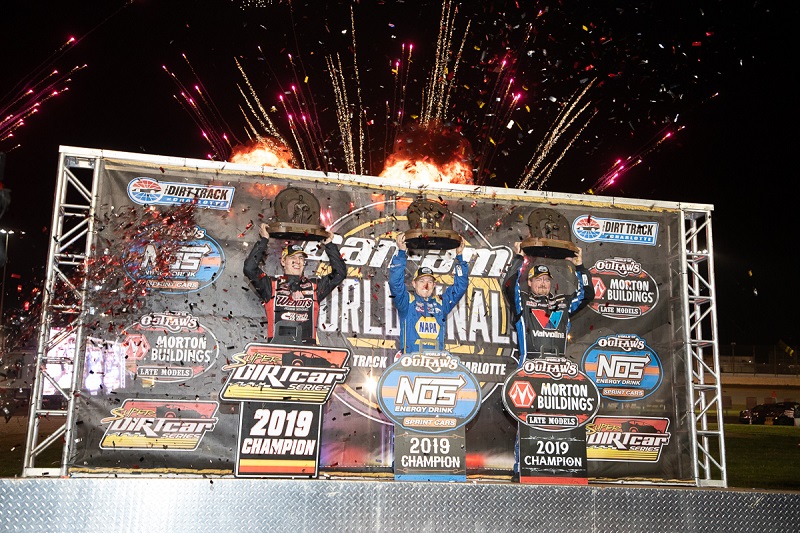 The season-closing World Finals is a three-day event with a unique format; practice and qualifying are held on Thursday while Friday and Saturday are their own points-paying events. Heat races and dash events are run each night, which determine the starting line-up for the feature event. 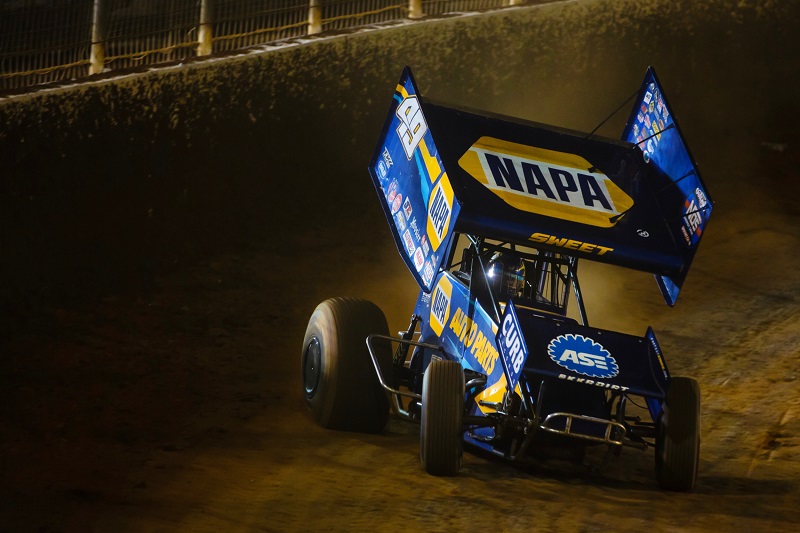 The Eric Prutzman-led team returned on Friday night, ready to tackle the task at hand. Starting fourth in his heat, Sweet fought his way to a second-place finishing position a spot in. The finish earned him a spot in one of two DIRTVision Fast Pass Dash events, six-lap sprints which determine the starting order of the first six rows of the feature.

Starting sixth in the second dash, Sweet advanced one position to finish fifth, which gave the No. 49 team the tenth starting spot for the feature.

At the drop of the green flag for Friday’s 25-lap feature, Sweet quickly moved into the eighth position. Schatz and the No. 15 Tony Stewart Racing team started sixth and also advanced two positions by lap eight. Sweet continued to give chase, keeping the defending champion in sight as the laps wound down. The only caution of the race fell with just ten laps to go, bunching the field up.

When the race resumed, Sweet dove to the bottom of turns 1-2 and found himself in the fifth position while Schatz ran fourth. However, with only three laps remaining, Schatz inched his way forward into the second position behind race leader David Gravel. At the checkered flag on lap 25, Sweet scored a fifth-place finish while Schatz finished second. 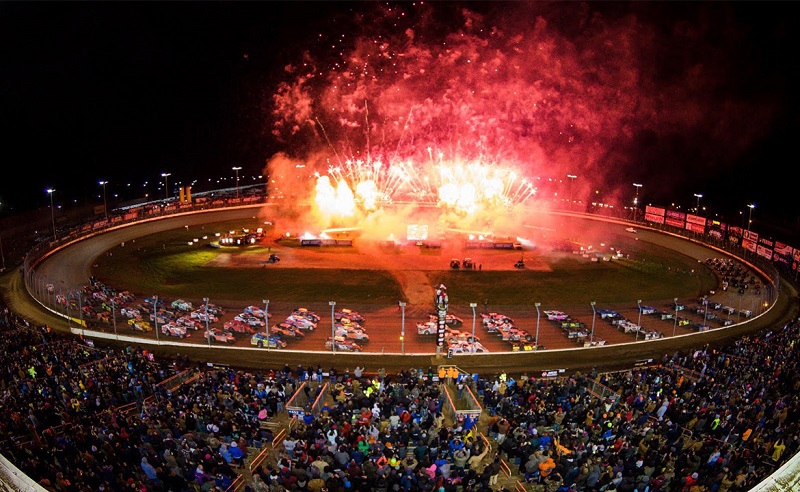 Heading into the final night of the season, only two points separated Sweet and Schatz in the championship standings.

Sweet started Saturday evening with the pole position in his heat. The Grass Valley, Calif., native went on to win the eight-lap race, which earned him an all-important spot in one of the two dashes later in the evening. Starting second after a random draw for the dash line-up, Sweet finished second, giving him the third starting position of the championship-deciding 30-lap feature. 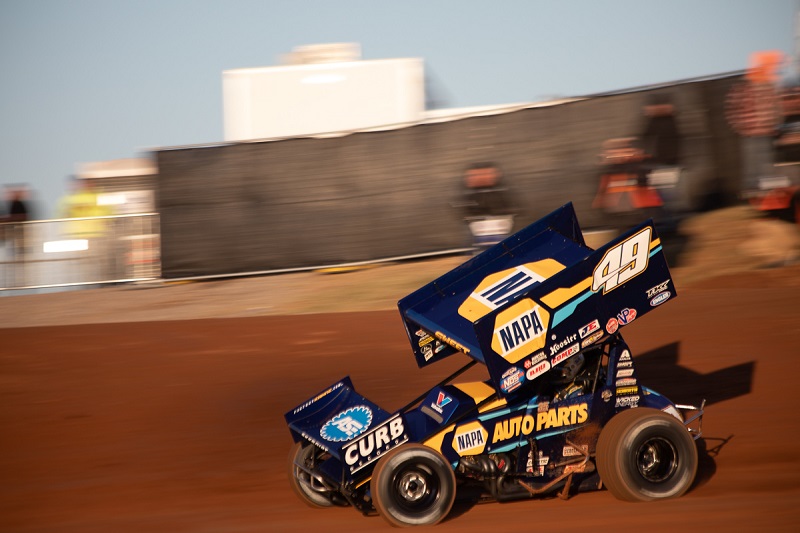 Schatz started eighth in the feature, but as the defending and ten-time series champion–with multiple wins at The Dirt Track at Charlotte–the championship battle was far from over.

When the initial green flag fell, Sweet attacked the first turn, narrowly completing a pass for the top spot over leader Jacob Allen. Allen fought back on the high side as they exited turn two while Sweet found himself side-by-side for second with David Gravel. The first caution flag fell before the field could complete their first lap.

The field made a complete restart, but another caution immediately fell for Paul McMahan, who got upside down in turn two.

After a red-flag for clean-up, the 27-car field made another attempt at restarting the race. Once again starting from the inside of the second row and working the low groove, Sweet settled into the third position as the field exited turn two. Yet another caution flag flew just after lap one was completed due to a multi-car crash in turns 3-4. All drivers involved were uninjured.

On the ensuing restart, Sweet used the same tactic as the previous restarts, running the low groove in turns one and two, and nearly working his way into the lead as the field made their way down the backstretch. Yet again settling into third, Sweet kept the top two cars in sight as the field finally began to click off laps. Championship rival Donny Schatz, who started in the eighth position, quickly worked his way towards the front. By lap five, the defending champion had caught Sweet for the third position. 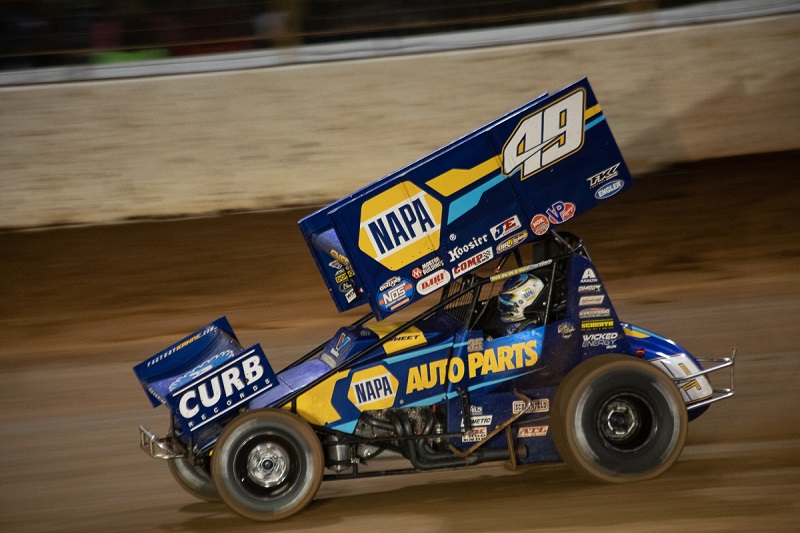 Sweet continued to work the low groove as Schatz worked the high lane, bringing the sell-out crowd of over 20,000 people to their feet.

Just a lap later, Schatz was able to complete the pass for third over Sweet as the pair entered turn three. Diving to the bottom of the race track, Sweet gave chase and powered back by the No. 15 machine as they exited turn four.

In a defensive move, Sweet shot to the high side of the race track as they entered turn one, taking Schatz’s preferred groove away. As the championship contenders exited turn two, the No. 49 NAPA AUTO PARTS machine began to slightly pull away from the Tony Stewart Racing No. 15.

Finding even more speed low on the race track, Sweet marched forward and, by the tenth lap, had caught second-place Jacob Allen. Sweet powered past the 1a machine, claiming second as Schatz tried to follow suit.

With ten laps to go, Sweet maintained a ten car-length lead over Schatz. As Sweet exited turn two, the No. 48 machine of Danny Dietrich ran into trouble and slowed down the backstretch.

Making an evasive maneuver, Sweet narrowly missed the stopped machine as the final caution flag of the night fell over the ½-mile speedway.

Restarting second with Donny Schatz right behind him and the red-hot David Gravel leading, Sweet immediately put another ten car-length gap over Schatz as the race restarted.

With clean air and no lapped traffic to navigate, David Gravel shot out to a commanding lead while Sweet continued to pull away from Schatz. When the checkered flag flew on lap 30, Brad Sweet had earned his first career NOS Energy Drink World of Outlaws Sprint Car Series title. It is Kasey Kahne Racing’s second championship, the first coming in 2013 with driver Daryn Pittman. 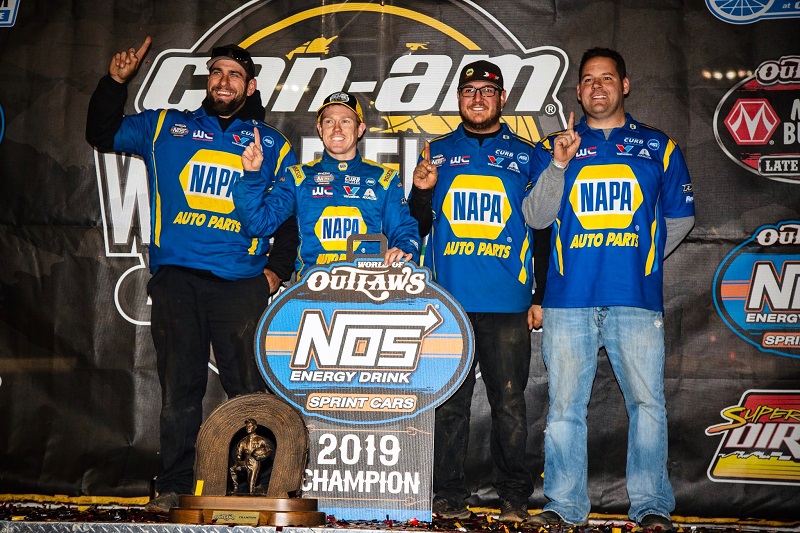 Winning by just a mere four points, Sweet’s title was the closest in the Outlaws’ 41-year history.

“I feel really relieved,” Sweet said in victory lane after the race. “It’s just different than winning big races. A championship is just a different level. You try to act like it won’t affect you if you lose, but it’s been the most stressful couple days of my life to be honest. I tried to act like it wasn’t.” 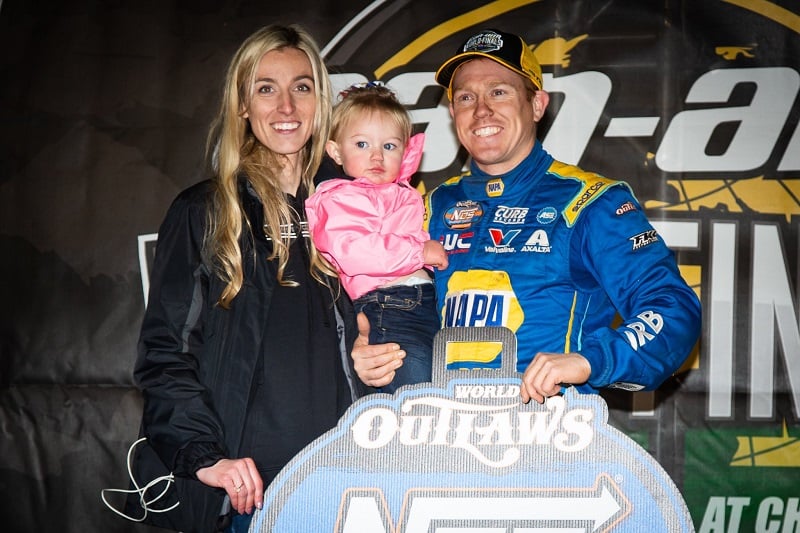 “I wasn’t as close to the teams back then [in 2013],” Kahne said. “That was my brother, Daryn and that team. They had an unreal season that year. I wasn’t as close to what they had going on. I was in Phoenix when they wrapped it up back then. I was watching it on DIRTVision when I was supposed to be doing an appearance, things like that. It was exciting for me but far different this year being so much closer to it.” 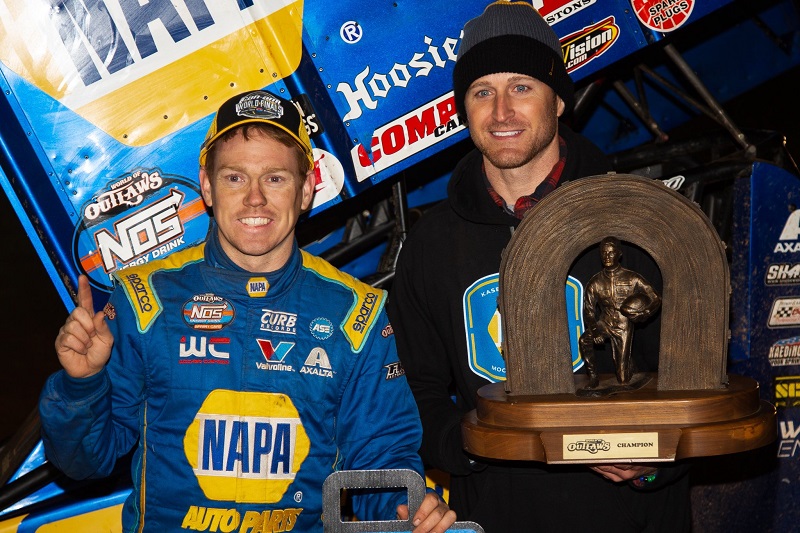 “Just so happy that we came out on top,” Sweet said. “You don’t know when the next opportunity to win a championship is going to be. You know, Donny is so good at running the points. We never really thought we’d have a chance to beat him. To come in here two points ahead, it’s kind of like winning the Knoxville Nationals on a green-white-checkered. Kind of the same feeling. You know he’s going to put pressure on you. Just so thankful we’re able to do it. We’re the best in the country now.”