Brake pad sensors might seem like new technology, but they’ve actually been around for quite a long time. In the early days of motoring, it was simple enough to communicate to drivers that their pads needed replacement by attaching a metal tab that would eventually make contact with the disc brake rotor after enough wear had occurred. The unpleasant squeal meant that it was time for a new set of stoppers.

How have disc brake pad sensors changed? Let’s take a look at the technology.

Clearly the irritation of squealing brake pads wasn’t the most driver-friendly way to indicate an issue. This is why electronic brake pad sensors were developed. Instead of using friction to create sound, they used a wire with an electrical current. When this wire came into contact with the brake rotor — after enough pad wear had put it in a position to do so — it would illuminate a light on the dashboard indicating it was time for a pad to be changed. Some systems used a two-wire setup, with varying degrees of pad thickness triggering a multi-stage warning by breaking the circuit earlier on in the pad’s life.

Naturally, the urge to complicate things arose, first in the luxury segment, with some vehicles offering a pad life calculation based on the mileage used to reach the first wear sensors. Some systems even factor in things like brake temperature, driving style, and even brake pad material into that equation.

You might have picked up on it by now, but when using terms like “break the circuit” to describe how a particular sensor works — especially one that’s related to wear — it’s typically not possible to use that particular sensor more than once. Brake pad sensors are intended to be replaced once they have served their intended purpose. 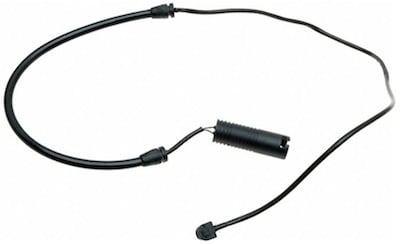 Some pad sensors are built directly into the pads themselves, while others are an add-on item that is changed when the brake pad itself is replaced. Installation of these sensors is a relatively simple process, and you don’t have to go to your dealership to find a set that will work for your vehicle. There are a number of aftermarket or direct-replacement brake pad sensors out there that fit a wide variety of vehicles.

If you’ve got a brake service light illuminated on your dash, it’s not something you should ignore. Believe the sensor — or the squeal — and have your system serviced as soon as possible so you can stay safe out on the road.

Check out all the brake system parts available on NAPA Online or trust one of our 17,000 NAPA AutoCare locations for routine maintenance and repairs. For more information on brake pad sensors, chat with a knowledgeable expert at your local NAPA AUTO PARTS store.

NAPA Know How Blog Brake Pad Sensors: How They Work And How To Fix Them