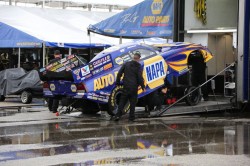 ENNIS, Texas (Sept. 22, 2013) – Ron Capps has made comebacks before in his drag racing career and after being upset Sunday in the first round near Dallas he is facing one of his most challenging climbs.

A loss in the opening round of the AAA Texas Fall Nationals at the Texas Motorplex, dropped Capps and his NAPA AUTO PARTS Dodge Charger R/T team from second to sixth in the NHRA Countdown for the Championship playoff after two of six events. 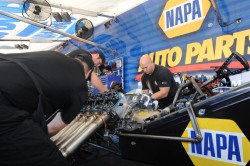 “We weren’t trying to do anything special, just repeat what we did in qualifying,” Capps said. “It looked safer than it was in qualifying but it went out there and smoked the tires. It moved around a little bit before that and tried to go to the inside on me.

“We saw Robert (Hight) run that 4.06 right before us. Tobler wasn’t doing anything other than try to run what we ran in qualifying. You don’t expect it when it goes out there and spins the tires like that. Tony was ahead of us then he slowed up.”

Capps, who qualified fourth for championship eliminations, trails Don Schumacher Racing teammate and points leader Matt Hagan, who lost in the second round, by 102 points heading  to Gateway Motorsports Park near St. Louis on Friday.

“This is a huge blow to our championship hopes,” a somber Capps said. “You can’t dwell on it too long. You have to go back out and do the best you can. Hopefully we’ll get our stuff together and go to St. Louis and win there.

The following are summaries for Capps in the Fall Nationals: