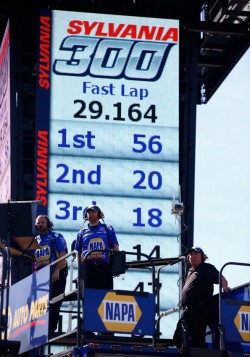 The NAPA driver started fifth and quickly showed the field he had a very fast Toyota. He led briefly on lap 32 before taking over the top spot on lap 35. He then went on to lead the next 75 laps. In total, Truex led 98 of the race’s 300 laps, a career-high at New Hampshire for the MWR driver.

Truex’s only handling issue was tight through the center of the turns. The final 50 laps saw a mad dash to the finish. The No. 56 NAPA Toyota restarted fifth, but slowed when Brad Keselowski almost wrecked in front on him and lost several positions. Truex rebounded to finish 10th – his 12th top-10 of the season.

“It was great to lead all those laps today for this team and our sponsor NAPA,” said Truex after climbing out of his No. 56 Toyota. “New Hampshire has been a tough track for us over the last couple of years so this means a lot. I can’t thank my team enough for how they persevered throughout everything the last couple weeks. I appreciate it.

“We had a good car the first half of the race and then the second half we just started getting tight – it was cooling off and clouding up. We just could never get it turning again. Then that last set of tires was just terrible for us. We just couldn’t do anything with hit. It’s unfortunate. The guys did a good job all weekend – we really struggled here the last few times and obviously made some huge gains in the right direction. We just weren’t good enough to be there when it counted.” 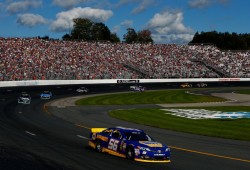