Chase Elliott and the No. 9 NAPA AUTO PARTS team earned their first victory of 2022 on Monday at Dover Motor Speedway after the race was postponed on Sunday due to rain. The 26-year-old driver led three different times for a total of 73 laps to nab his second win at the 1-mile track and the 14th of his NASCAR Cup Series career. 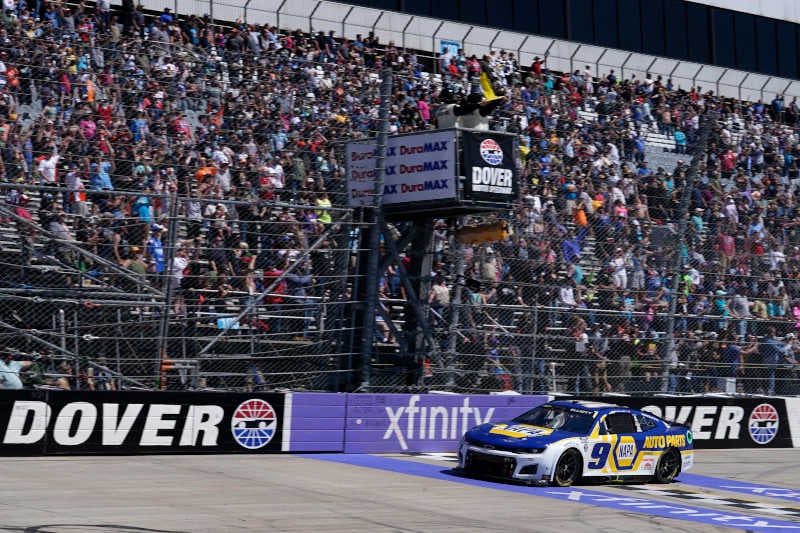 The 26-year-old driver started the race from the fourth position and showed strength early on. He was scored in the second position when the race was red flagged due to rain midway through the first stage and eventually postponed until Monday. 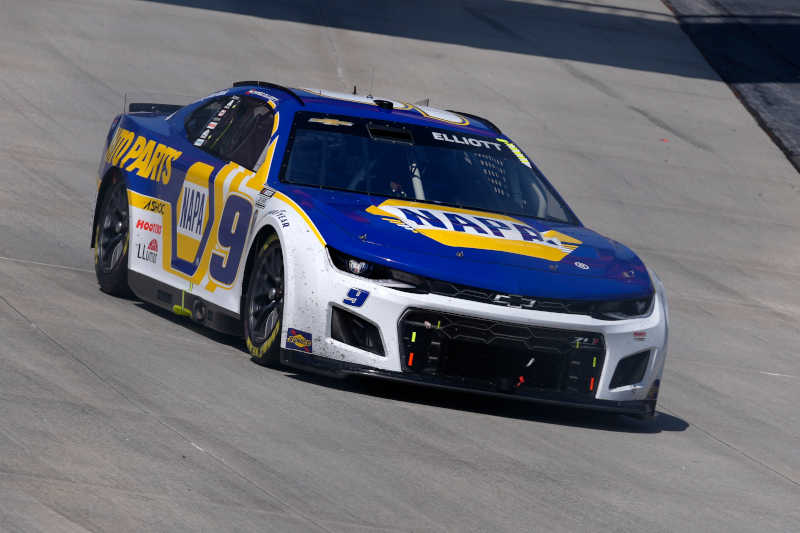 When the race resumed on lap 84 on Monday afternoon, Elliott was running in the second position behind teammate Kyle Larson. Just a few laps into the run, the caution came out for a multi-car incident. Elliott reported to his team that his NAPA AUTO PARTS Chevrolet Camaro ZL1 was pretty good to fire off. Staying out under the yellow flag, Elliott restarted on the bottom of the front row and got by Larson for the lead, holding point for 19 laps before his tires started wearing out and Denny Hamlin worked his way by with eight laps remaining in stage one. The Hendrick Motorsports driver took the green-and-white checkered flag on lap 120 in second. 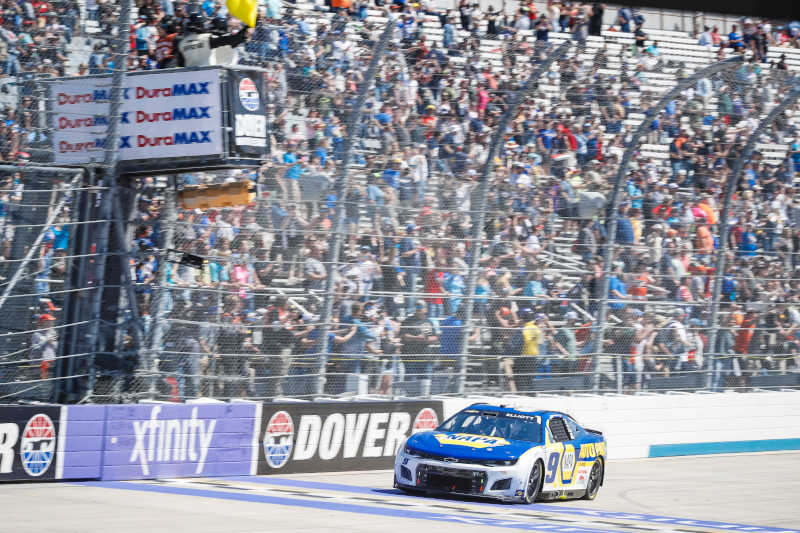 Crew chief Alan Gustafson called Elliott to pit road for four fresh tires, fuel and a chassis adjustment. The driver of the No. 9 took the green flag for the second stage from the third position on lap 129 and was scored in fourth when a caution came out 28 laps later. He reported that he was hard on the right front that run. The team opted to pit for four tires and fuel, sending him back out to restart third on lap 164. The car ahead of him got a bad restart and Elliott lost some ground, dropping back to fifth. He continued to race inside the top five until the yellow flag was displayed again at lap 189. After a pit stop for fresh tires and fuel, Elliott lined up 13th for the restart with some cars opting to stay out under the caution. It didn’t take him long to find his way back inside the top 10 before another quick caution flag waved.

Restarting from the ninth position with 50 to go in the second stage, Elliott methodically pressed forward, advancing his position to second in less than 25 laps. Still running in the second spot when the caution flag waved with nine to go in stage two, the team opted to pit for four fresh tires and fuel. Elliott lined up sixth with three laps remaining in the stage, but a chaotic restart caused him to lose some positions and he crossed the line in 10th on lap 250. 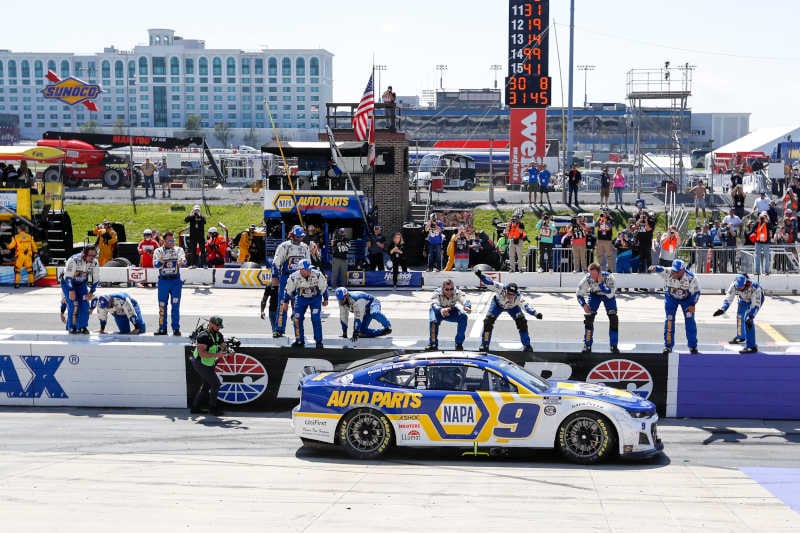 During the stage break, Elliott stayed out on the track and restarted inside the top 10 on lap 258. A long green flag run ensued, and Elliott was running in sixth when teams started making their pit stops. Elliott was about to make his way to pit road when the caution flag waved on lap 324. Making his stop for four tires and fuel under the yellow flag, the Dawsonville, Georgia, native took the green flag in third and worked his way up to second before the race fell under caution again with 66 laps remaining. 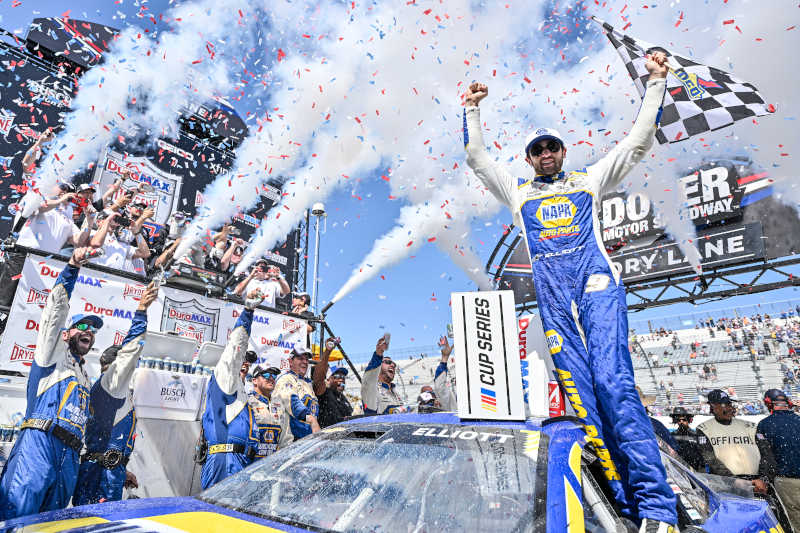 Elliott lined up inside the front row for the restart with 61 laps to go and was battling for the lead when an incident brought out the yellow with just 58 laps left in the race. Choosing the bottom again, this time Elliott made it work for him on the restart and he powered his way to the lead. He never looked back as he drove on to his first win of the 2022 season. 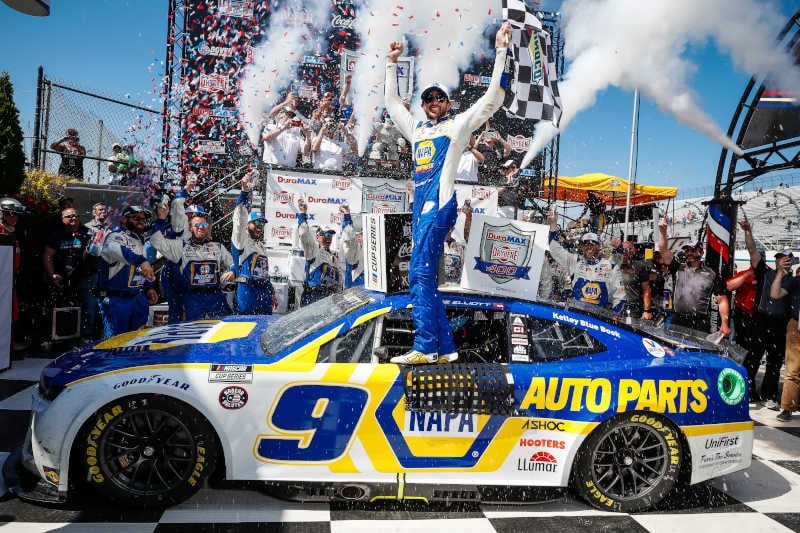 The victory was the 14th of his Cup Series career. He continues to lead the point standings by 50 markers over Ryan Blaney.

“I really appreciate Alan (Gustafson, crew chief) and our entire No. 9 Chevrolet team for just sticking with it,” said Elliott. “We’ve had some tough races over the last four, five months. It’s just great to get NAPA back to victory lane (and) get Hendrick Motorsports back to victory lane. (I’m) just so proud. This one means a lot in a lot of different ways.”