Chase Elliott started eighth in Sunday’s NASCAR Cup Series race on the road course at Indianapolis Motor Speedway and raced as high as second. He restarted from the runner-up spot late in the race and was collected in a multi-car incident. Undeterred by the loss of track position, he battled back for a 16th-place result. Strong finishes in the first two stages made for a good points day for the 2020 Cup Series champion as he expanded his point standings lead to 125 markers over second with just four races left in the regular season. 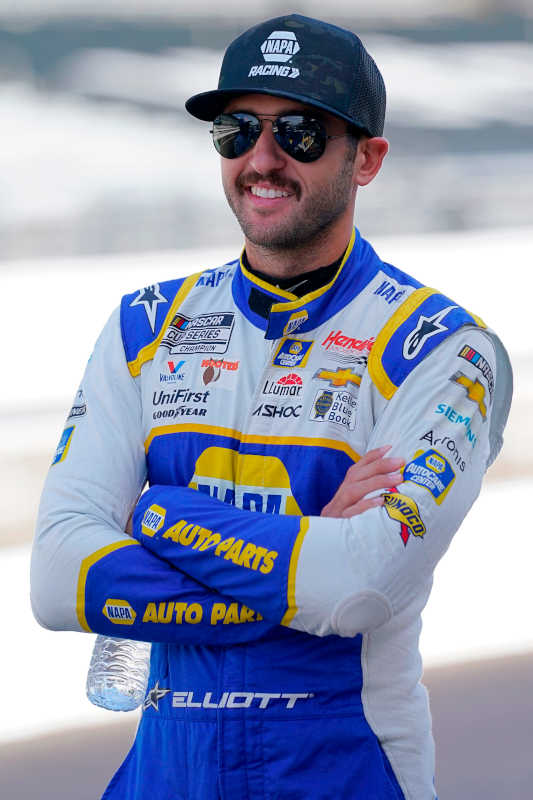 Elliott qualified eighth for Sunday’s  race and battled inside the top 10 from the drop of the green flag. Early in the run, he reported that his NAPA AUTO PARTS Chevrolet Camaro ZL1 was much better than it had been during Saturday’s practice session. Elliott was running in the ninth position when he spun in turn one with less than five laps to go in the first stage. Able to continue, he remained on the track while other cars made pit stops before pit road was closed. The strategy paid off as Chase crossed the line in fifth to end the stage. 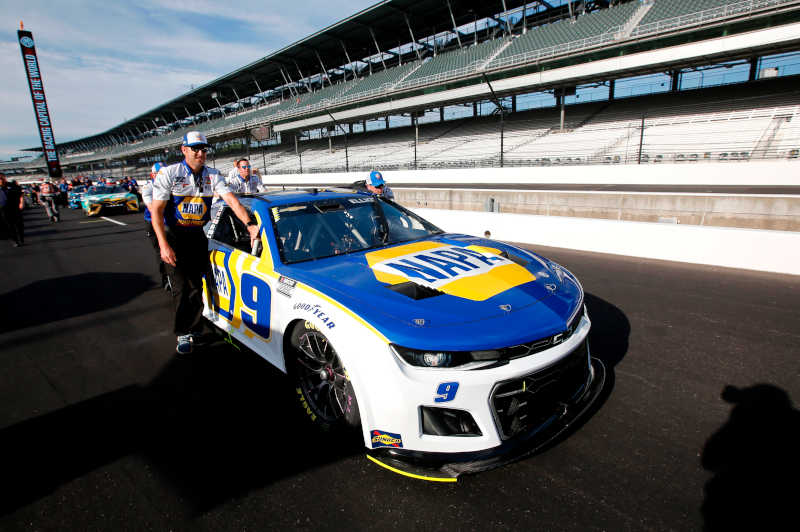 During the stage break, crew chief Alan Gustafson called Elliott to pit road for four tires, fuel and an air pressure adjustment. The team also took a closer look at the NAPA Chevy to make sure there was no damage. The driver of the No. 9 lined up 27th for the start of stage two on lap 20. During a hectic first lap, Elliott was forced to drive through the grass but didn’t lose track position and made his way to 18th by lap 24. Running in 17th just two laps later, he relayed that his Chevrolet’s balance was pretty good, but he needed to improve through the braking zones. Elliott steadily continued improving his position, and with teams on multiple strategies, some cars started pitting towards the end of the stage. As the laps wound down, he worked his way inside the top 10 and ended the stage in fourth place. 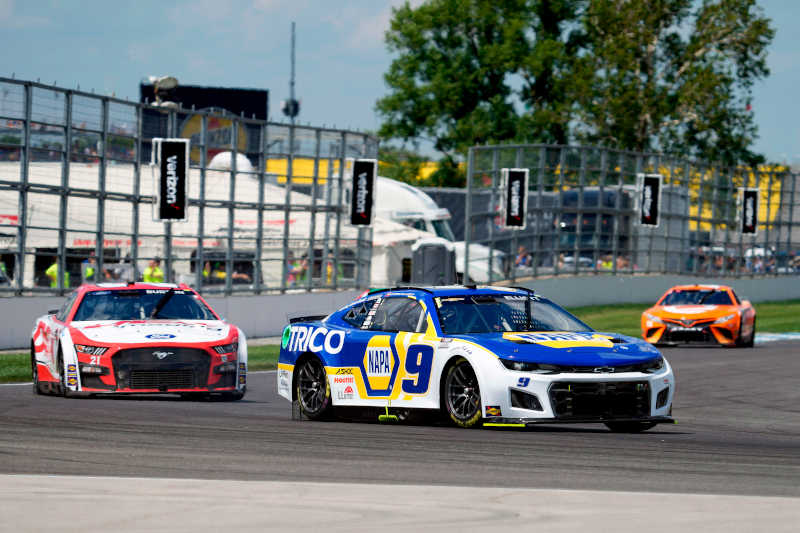 Under the stage ending caution, Elliott took four fresh tires and fuel for his NAPA Chevy during a fast stop by the team. Due to several cars staying out during the caution, Elliott took the green flag for the final stage on lap 39 from the 26th position. Less than 10 laps later he had maneuvered his way to 12th and was back inside the top 10 with 33 laps to go as green-flag pit stops started. Elliott was up to second before he was called to pit road with just under 30 laps remaining. 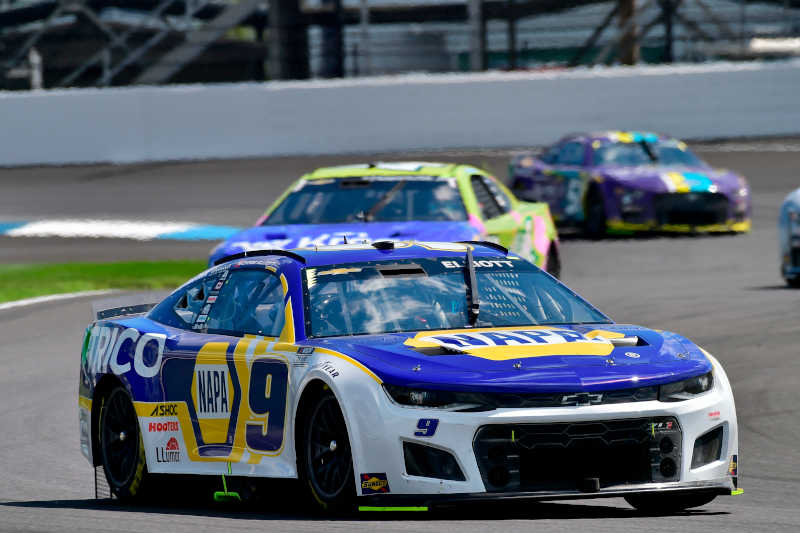 Once back out on the track, the 26-year-old driver was in the 13th position and cycled through to seventh before a caution flag waved with 22 laps to go. Under the yellow flag, Gustafson relayed to Elliott that his weakest spot on the track was turns four, five and six, but that he had the fastest car on the backstretch. Opting not to pit, Elliott lined up sixth for the restart and powered his way to third in a hurry. With nine laps remaining, he made the pass on Ryan Blaney for the second spot and set his sights on the leader. When a caution flag came out with just five laps left, Elliott and the team discussed their strategy for the pivotal restart. Once the green flag waved and the field headed into turn one, a multi-car incident occurred and Elliott was collected. The yellow flag was displayed once again and Elliott brought his Chevrolet to pit road for four fresh tires and allowed the team to survey the damage. After pitting one more time for repairs to the rear bumper, Elliott lined up deep in the field as the race headed into overtime. He battled hard in the final laps, bringing his NAPA Chevrolet home with a 16th-place finish. Tyler Reddick claimed the victory. 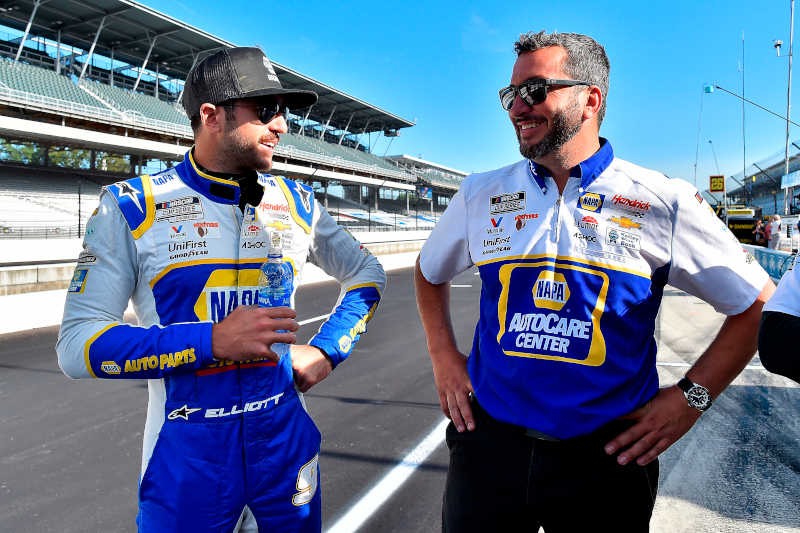 A strong points day for Elliott allowed him to grow his Cup Series point standings lead to 125 over second-place Blaney with just four races left in the regular season. Next up, the series heads to Michigan International Speedway.

Next Race: Sunday, August 7, Michigan International Speedway
How to Watch or Listen: 3 p.m. ET on USA, MRN and SiriusXM