It used to be when you heard someone say “diesel,” the word “dirty” was usually in close proximity. Those were the old days. Today’s modern diesel engines, including those found in popular medium duty vehicles, have been engineered to reduce those dirty emissions, including particulate matter (soot) and oxides of nitrogen (NOx). Since 2004 when new diesel emissions standards went into effect for onroad diesel engines, maintaining the exhaust gas recirculation (EGR) system has become an essential part of the service process.

What An EGR Valve Does 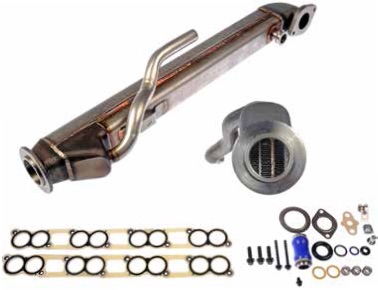 The EGR valve redirects a portion of the exhaust gas back into the intake system. While this might sound counterintuitive, it actually has the effect of lowering internal combustion temperatures, reducing the amount of NOx emissions. Some vehicle emissions systems include an EGR cooler to further reduce these temperatures.

These reduced NOx emissions don’t come without a penalty, though. The downside is an increase in particulate matter, which the exhaust system takes care of downstream with a diesel particulate filter and oxidation catalyst. However, the portion of the exhaust gas that recirculates to the intake system still contains that additional soot, which can build up and foul the EGR valve. Combined with oil vapor from crankcase ventilation, it creates a sticky film that eventually coats the inside of the intake manifold and valves. The same sooty buildup that can take out an EGR valve can also contaminate an EGR cooler, reducing its flow and efficiency.

A sticking EGR valve or blocked EGR cooler will cause rough running, excess emissions and the dreaded engine warning light. To keep the entire diesel emissions system in top working condition, the EGR valve should be replaced as part of regular servicing, rather than waiting to replace it when it fails. A fouled EGR valve is probably a good indicator that the EGR cooler is also contaminated and should be replaced.

NAPA Solutions offers an extensive list of new (not remanufactured like some competitors) EGR valves and EGR coolers for most medium duty applications. Insisting on timely replacement of these important emissions components is the best way to ensure dirty diesels remain a distant memory.

Check out all the fuel & emission system parts available on NAPA Online or trust one of our 17,000 NAPA AutoCare locations for routine maintenance and repairs. For more information on EGR valves and EGR coolers, chat with a knowledgeable expert at your local NAPA AUTO PARTS store.