How much does it cost to replace an alternator? There are two key factors to consider with alternator replacement: alternator cost itself as a component and the cost of labor, which can vary depending on which mechanic you choose or if you choose to do it yourself. If you Here’s how to know if your alternator needs replacing and how much you can expect to pay for replacing an alternator.

What Is an Alternator? 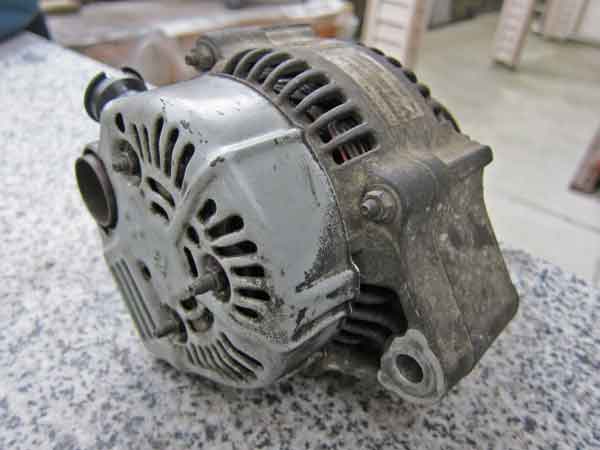 Your alternator is a key component of your car. You can think of an alternator as a sort of electrical generator. Not only does it power your vehicle while it’s running; it also ensures your battery recharges when the engine is off. Everything from your headlights to your air conditioning to your power seats to your turn signals require an alternator to work.

Signs of a Bad Alternator

There are several things you may notice if your alternator is failing. If the bearings inside the alternator are starting to fail you will likely hear a whining or grinding sound. The alternator itself may be hot from the additional friction. Worst case scenario the alternator seizes resulting in a shredded or thrown drive belt. If the voltage regulator is going bad you may notice your headlights and dashboard lights look dim. The car might not readily start, or it might stall. If you use accessory mode, you may notice things don’t work as expected, such as power seats and windows operating unusually slow. The biggest warning sign is an illuminated warning light on your instrument cluster.

You can test if you need a replacement alternator at home if you have a multimeter available:

Your local NAPA AutoCare can also test your alternator for proper output.

How Much is a New Alternator?

The cost of an alternator varies between cars. While there are more affordable alternator replacement cost options that will work in some cars, budget for around $350 for a common alternator. If you have a newer vehicle with more options and greater electrical needs the price will likely go up to as much as almost $1,000. For example some alternators like those found in certain BMW models are water cooled  which helps them operate more efficiently, but also adds to the part cost. Some mild hybrid drive systems use a combination motor/generator rather than a standard alternator which can also be more expensive.  Note that you may need to have other parts, such as the serpentine belt, replaced at the same time. This would add $50 or so to the total cost.

Don’t Forget About the Labor

The car alternator cost of the part itself is only one piece of the equation. To figure out how much is an alternator you also need to account for two to three hours of labor to get the job done. Depending on where you go, that’s another $125–$200 an hour. You can do this yourself, but it may be a tricky job. It’s not so much in the removal and installation of the alternator, but in accessing it within the engine compartment. Depending on the engine layout other components may need to be removed to access the alternator. If access is easy, this is absolutely a job that an amateur mechanic can manage.

We’ve tried to demystify how much do alternators cost but the answer boils down to it can vary based on multiple factors. An alternator is an important part of your car. Your vehicle won’t run if the alternator fails, so pay attention to the warning signs and budget for the repair so you’re not left with a car that won’t start.

Check out all the alternator repair products available on NAPAOnline, or trust one of our 17,000 NAPA AutoCare locations for routine maintenance and repairs. For more information about how much does an alternator cost, chat with a knowledgeable expert at your local NAPA Auto Parts store.

NAPA Know How Blog How Much Does It Cost to Replace an Alternator?