NHRA returned to racing after a 140-day hiatus due to the global COVID-19 pandemic. The revised schedule features 16 races, 15 of which will be contested in a two-day format, with two qualifying runs on Saturday and eliminations contested on Sunday. 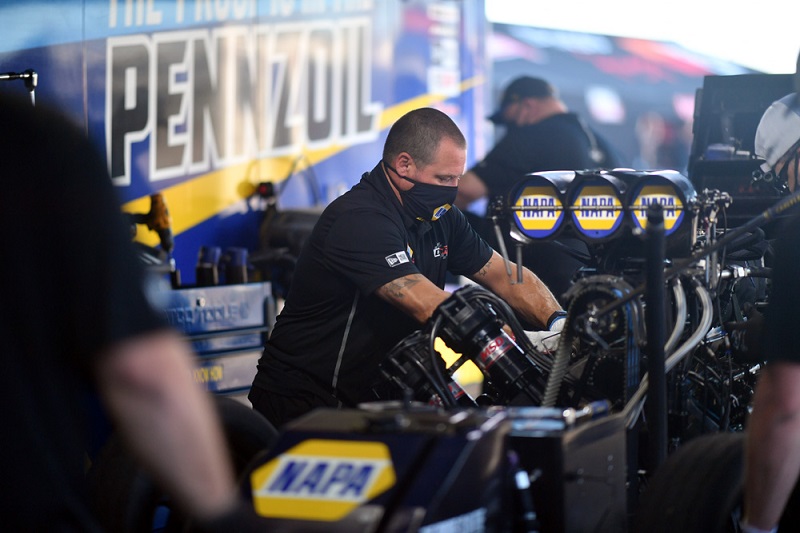 The season resumed with the E3 Spark Plugs NHRA Nationals in Indianapolis. After struggling to get their footing throughout qualifying, Ron Capps and the NAPA AUTO PARTS Funny Car team found themselves in the unfavorable position of starting race day from 16th and having to face their teammate and No. 1 qualifier in round one. Capps made an impressive run on Sunday morning, one which would’ve defeated nearly the entire Funny Car field, but wasn’t enough to take down his opponent, who clocked ‘top speed of the meet.’ 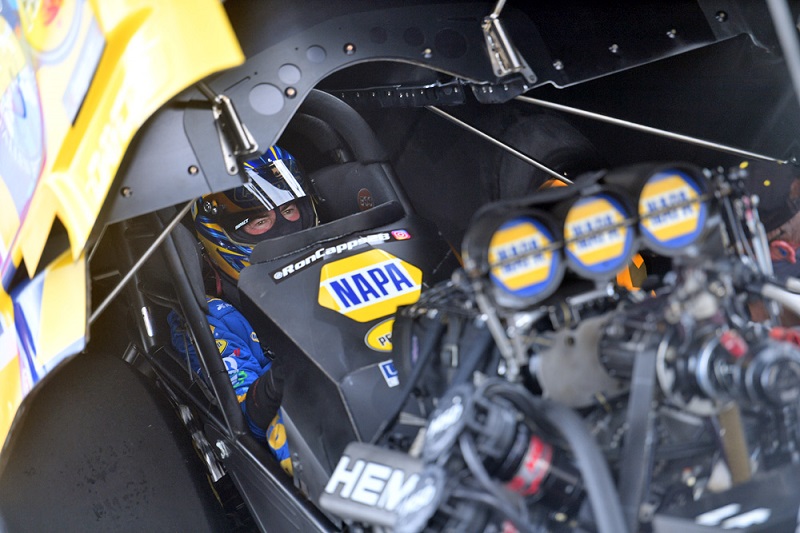 Capps was eager to hop back into the NAPA AUTO PARTS Dodge Charger SRT Hellcat and resume his quest for his first 2020 victory. The race weekend got off to a bumpy start for Capps, who struggled to get down the track in Q1, posting a 4.555 E.T. When he pulled up to the line for Q2, an ignition issue prevented him from being able to stage the car and make a run. With NHRA’s new abbreviated schedule format which allows competitors just two opportunities on Saturday to qualify for Sunday’s elimination show, Capps was forced to settle on his Q1 time and started Sunday from 16th. 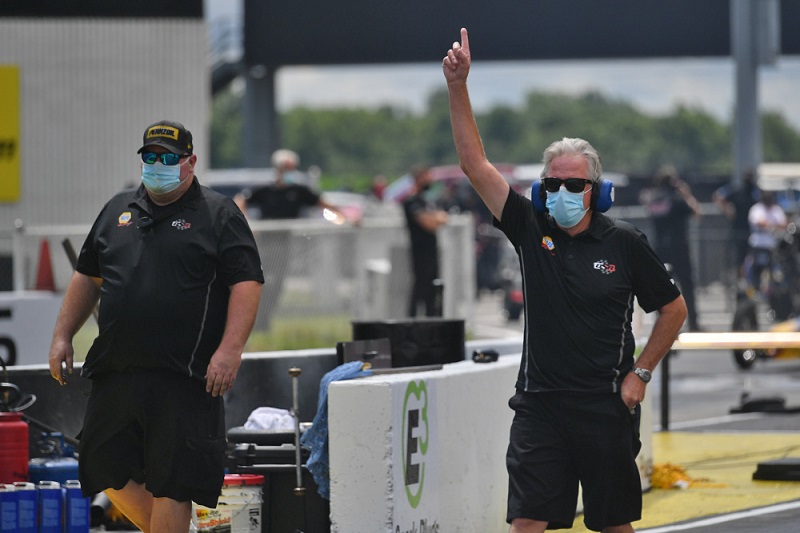 Capps and the NAPA team knew their first-round competitor would be tough. They faced teammate and No. 1 qualifier Tommy Johnson Jr., who was still riding the momentum from his win at the last-contested NHRA event back in February. Capps pulled up to the line and laid down a solid 3.956 E.T., the second-quickest run of the entire first session. Unfortunately for Capps, the only car to run better happened to be his opponent, who clocked a 3.896. 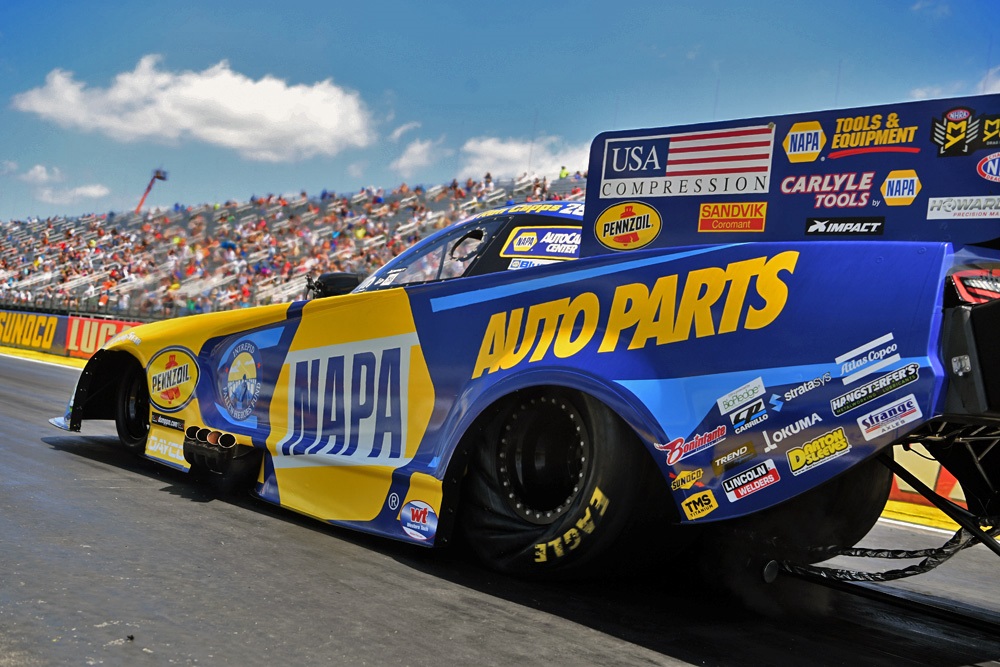 While they didn’t walk away with the round win, Capps and the NAPA team are comforted by the fact that they have their car back and know they’re capable of running big numbers. They won’t have to wait long for another chance to nab a Wally trophy. The NAPA team will be back on the Lucas Oil Raceway dragstrip on Saturday, July 18, to compete in the second of two consecutive Indianapolis events. 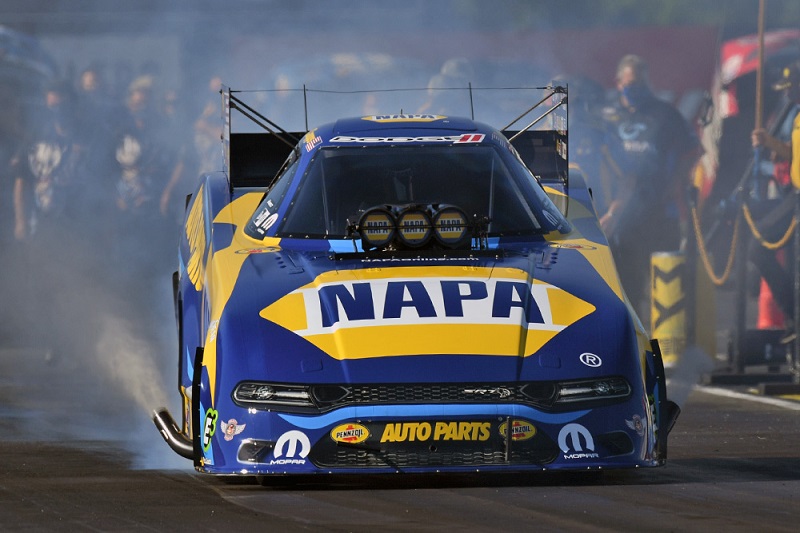 “We didn’t qualify where we wanted to, but I always brag about our NAPA team that we can win from any starting position,” said Ron Capps, a 64-time event winner. “My friend and former teammate Larry Dixon texted me yesterday and said you have a much better chance of winning from the 16th  position than the 17th . We just went up there and did what we do. (Crew chief Rahn) Tobler did a great job reading the race track without lane choice. We had to go up and race (crew chief) John Collins, who we know well, and Tommy Johnson, who is as good as it gets in the driver’s seat. At that point, we were second-quickest of the round and I shut the car off a little early because Tommy was ahead of me. I’m very happy with how the weekend finished after that run. Unfortunately, we just put ourselves in a bad position with qualifying and we just can’t do that. That’s not our MO. I’m very excited about next weekend.”