Chase Elliott started Sunday’s NASCAR Cup Series race at Phoenix Raceway from the fifth position in pursuit of his second championship. Elliott finished the first stage in the sixth position and the second stage in 12th. The 26-year-old driver was inside the top 10 during the final stage of the race when his No. 9 NAPA AUTO PARTS Chevrolet Camaro ZL1 made contact with fellow Championship 4 competitor Ross Chastain during a restart. The contact sent Elliott spinning into the inside retaining wall, causing damage to the NAPA Chevrolet. Elliott was able to continue on, but the damage hurt the No. 9’s handling and he was ultimately scored with a 28th-place finish. The 2022 regular-season champion ended the playoffs fourth in the Cup Series point standings. 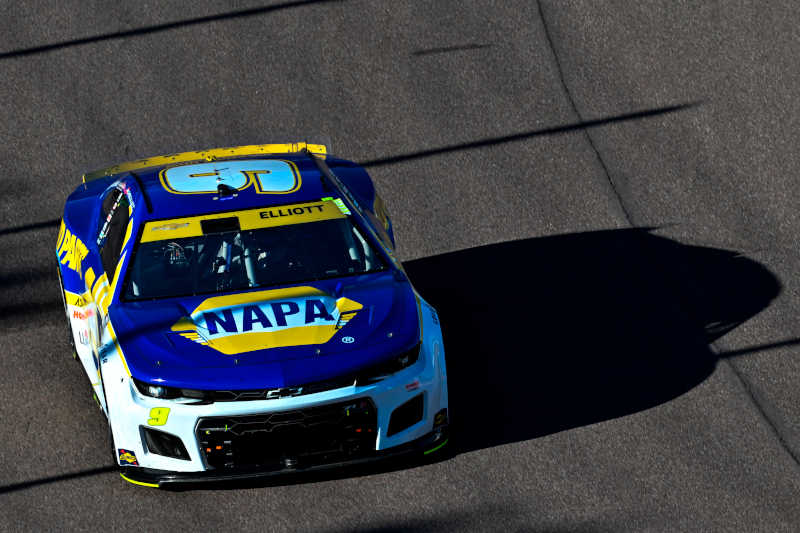 Elliott started from the fifth position and continued to battle inside the top 10 in the opening laps. After dropping back to sixth on lap 16, he maneuvered his way to fifth just 10 laps later. With the stage going caution-free, his NAPA AUTO PARTS Chevrolet Camaro ZL1 started getting edgy into turn one and he lost a position, taking the green-and-white checkered flag in sixth. Under the stage-ending caution, crew chief Alan Gustafson called Elliott to pit road for four tires, fuel and an air-pressure adjustment to try to fine tune the NAPA Chevrolet’s handling. 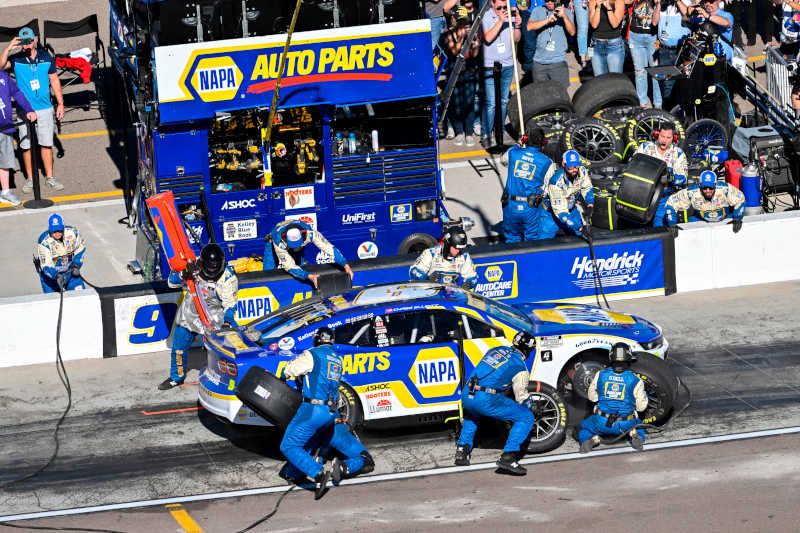 The 26-year-old took the green flag for the second stage from the sixth position on lap 69 and was scored eighth when the caution flag waved on lap 85 for an incident. Under the yellow, Elliott brought his Chevrolet to pit road for four tires, fuel and adjustments. He restarted 11th on lap 90 and worked his way back inside the top 10. The Hendrick Motorsports driver was running in the eighth position when the team made the call for Elliott to come to pit road for four tires and fuel on lap 153 after it was determined he wouldn’t have enough to make it to the end of the stage. Back out on the track, Elliott un-lapped himself and drove his way to 12th by the end the second stage on lap 185. 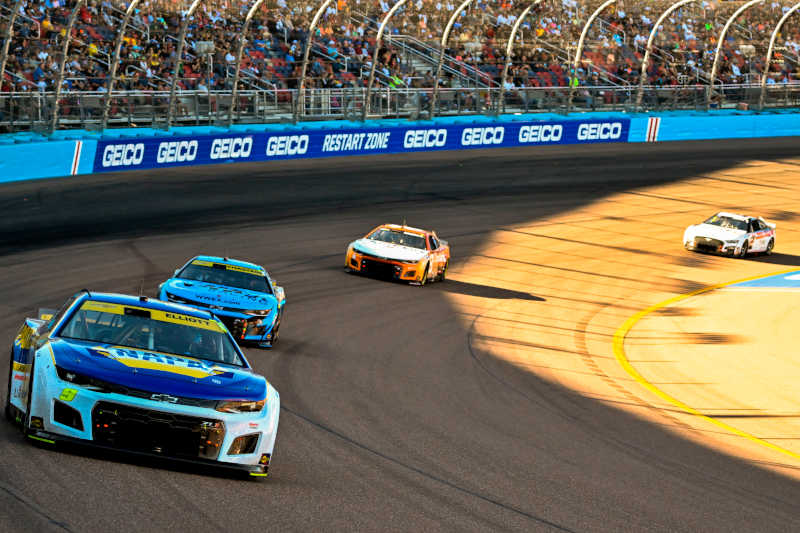 During the stage break, the 2022 regular-season champion brought his No. 9 NAPA Chevrolet to pit road for four tires and fuel after reporting that he was happy with the handling during the last run. A fast stop by the NAPA crew got Elliott off pit road in the sixth position. He took the top lane to start the final stage on lap 192. An incident brought out another quick caution and Elliott was scored in the fifth position. He took the bottom for the restart and, heading into turn one, made contact with fellow Championship 4 competitor Ross Chastain. His NAPA Chevrolet was sent spinning into the inside retaining wall and suffered damage. He headed to pit road so the team could assess the severity. The team did what it could on quick repairs and sent Elliott back out on the track. Elliott’s Chevrolet met minimum speed, but he was scored a lap down in the 30th position. In the closing laps, the team was hopeful for an opportunity to make additional repairs to the No. 9 NAPA Chevrolet, but the opportunity never came. The Dawsonville, Georgia, native ultimately took the checkered flag in the 28th position and ended the season fourth in the Cup Series standings. 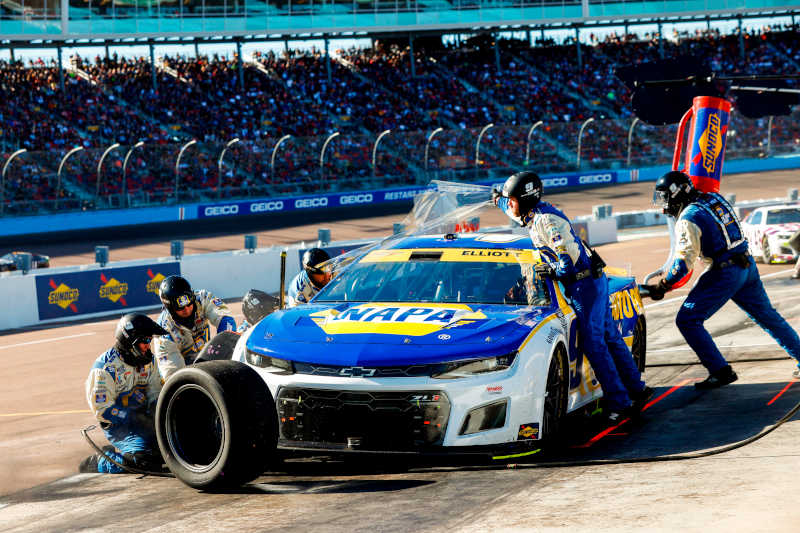 “I’m not sure what happened (with Ross Chastain),” said Elliott. “I haven’t seen it. Unfortunately, it ruined our day. Congratulations to Joey (Logano) and their team. They did a really good job all weekend. He’s a very deserving champion so that’s a positive at least. If you’re going to lose to one, lose to a deserving one. 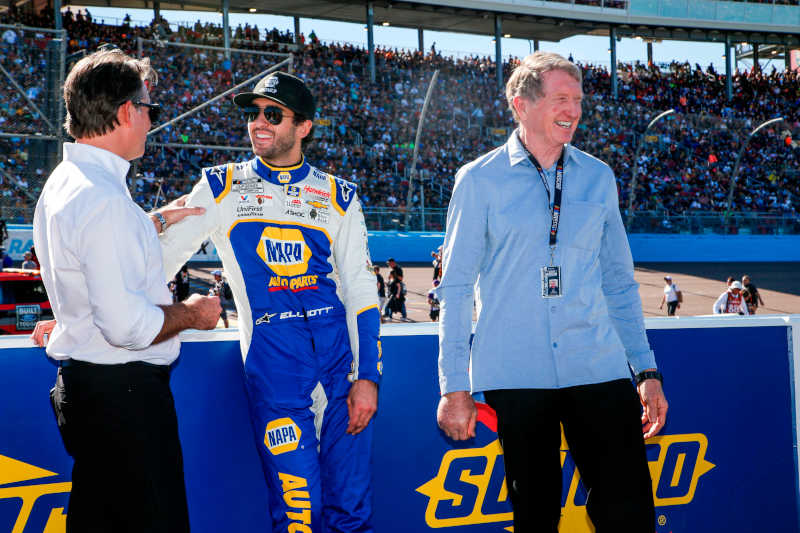 “I’m proud of my team for the effort they put in this weekend. I felt like we had gotten our car a lot better throughout the race. For that I think we should be very proud. It’s very nice to make the (final) round. It’s a very difficult thing to do. Obviously, I’m not content with that but certainly it’s nice to come out here with a shot. Hopefully we can come back stronger next year and give ourselves another chance and make it go our way next time.”