Engines get so hot under normal driving conditions that there is an entire system dedicated to cooling them down. That’s because an overheating engine will cause problems and even complete engine failure. Instead of shelling out thousands of dollars and enduring a ton of stress, here’s a primer on some common causes of engine overheating — and how to keep up with your cooling system before disaster strikes.

How Your Cooling System Works

The cooling system used on almost ever water cooled internal combustion engine is as follows: The engine is designed with hollow cooling passages which allow liquid coolant to flow around all the areas that get hot. Special liquid coolant contains a mixture of additives that not only raise its boiling point, but also lowers its freezing point. A water pump moves the liquid coolant through cooling system. A thermostat determines when the temperature is right to allow coolant circulation through the engine. Once the car is warmed up, hot coolant flows from the engine through a radiator in order to remove heat from the liquid coolant (by way of air and fan) before getting pumped back through the engine to cool internal components and pick up more heat before heading back to the radiator.

For not as common air-cooled engines like those used in vintage Chevy Corvair, Volkswagen and Porsche models, the cooling is done via oil and air. A large engine powered fan draws air across the finned cylinder heads dissipating heat. The engine oil is also cooled via an oil cooler (like a radiator), so in some ways the engine could be considered oil cooled.

What Causes an Engine to Overheat

The most common causes of an overheating engine are:

Other common causes might include a broken or damaged water pump belt that prevents proper pressurization and/or circulation, collapsed radiator hoses or a buildup of contaminants such as rust and road debris, bad fan clutch, or a blocked radiator. Some modern vehicles have an electric water pump which can fail internally, or suffer an electrical issue.

What You Can Do 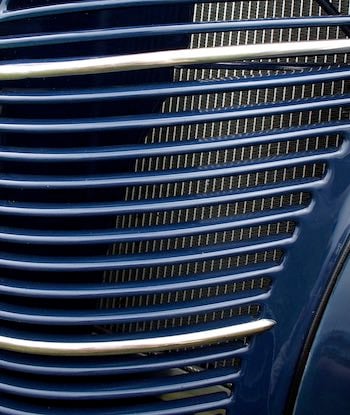 The most important thing you can do for your cooling system is keep an eye on it. Typically there is a temperature gauge on the dash to aid you, but it doesn’t hurt to pop the hood every now and then to make sure your coolant level is as it should be and to check on the fan belt condition. It’s normal to top off your coolant every so often, but if you’re having to do it regularly — or if you see a telltale puddle of coolant under your car — your system will need to be pressure-tested to locate any leaks. Don’t forget to have your cooling system flushed at the intervals specified in your owner’s manual.

If your vehicle overheats while driving, pull over and shut off the vehicle to assess the situation. Pop the hood and allow the engine to cool for 45 minutes. Opening the system and adding cold fluid while the engine is still hot is dangerous for both you and the engine. There is NO safe way to open a hot cooling system, so forget about whatever tricks you’ve seen or heard. If there’s only a small leak, adding water will be good enough to get you to a NAPA Auto Parts store, but you’ll need to replace it with proper coolant mixture so there’s no risk of damage in cold weather. If the level looks fine, carefully check the temperature of both top and bottom radiator hoses — if one is very hot and the other is not, this points to a thermostat that is stuck closed.

If you must drive, shut off the air conditioner, and turn on the heater full blast. Granted, overheating is most common in the summer so this might be uncomfortable, but it will reduce the engine load and help allow heat to dissipate. Just roll down the windows and crank the fan to high. Your heater is actually a miniature radiator located under the dash, so adding the extra cooling capacity to the system can make a difference. If you’re driving at low speeds on roads that aren’t too bumpy, you can pop the hood without releasing the latch to allow a bit of extra air in that way. Emphasis on low speeds of 20 mph or less. If you are stuck in traffic with no way to pull over, leave a bigger gap than normal between yourself and the vehicle in front of you to allow for better air flow into your radiator. Being bumper-to-bumper with the vehicle in front of you pumping hot exhaust gasses into your radiator isn’t helping.

Ultimately, though, if you are out of coolant or your water pump has failed, no amount of tricks will save you. You will need to stop the vehicle, or risk severe engine damage. Driving an overheating engine can lead to a blown cylinder head gasket, failed internal components, and possibly even a cracked engine block. The best advice is to just park it and call a tow truck.

Never remove a radiator cap while the engine is still hot! The system is pressurized, and hot coolant will spray out and onto your face and arms. Don’t touch any engine parts as they will be extremely hot, even ones made from plastic. Let everything cool down before trying to diagnose why the engine ran hot.

Check out all the heating & cooling parts available on NAPAOnline or trust one of our 17,000 NAPA AutoCare locations for routine maintenance and repairs. For more information on dealing with an overheating engine, chat with a knowledgeable expert at your local NAPA AUTO PARTS store.

NAPA Know How Blog Overheating Engine? Here’s Why and What to do About it