The air around us is a veritable cocktail of several gasses. Oxygen gets the most attention, but nitrogen actually outstrips it in volume, and there are several others rounding out the atmosphere that sustains life as we know it. As engines rely on the intake of atmospheric air for the combustion process, this chemical makeup and its characteristics must be considered in engine design. This is where the EGR (exhaust gas recirculation) valve comes in. It manages the chemical and thermal inevitabilities of engine use and keeps the engine running smoother for longer. A bad EGR valve will cause you problems.

Temperatures in the combustion chamber can get hot. We’re talking 2,500+ degrees Fahrenheit hot. When that happens, a chemical reaction takes place between the nitrogen and oxygen, creating NOx, or Nitrous Oxide, which is an indirect greenhouse gas. This new gas, along with burned and unburned fuel, is delivered from the chamber during the exhaust phase of combustion. It then travels through the exhaust system, through the tailpipe and into the atmosphere. Over time, it creates deposits in the system that can cause blockage and other headaches.

So, What Does the Valve Do?

The EGR valve allows a specifically measured amount of exhaust gas to re-enter the intake stream. This changes the chemical makeup of the air entering the engine, and keeps the combustion process from getting destructively hot. In turn, this inhibits further NOx production, returning a cleaner exhaust and giving your engine a much easier time of things. The EGR system connects exhaust to intake, and is either vacuum- or electronically controlled. The valve itself basically has two settings: open and closed. It should normally remain closed when the engine is starting up, at low speeds and idling. Once the engine reaches operating temperature and is put under load, it should open and allow air to pass. But it can also become stuck. 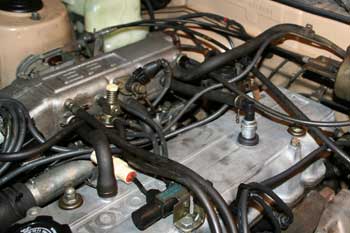 If the valve is stuck open, exhaust air will flow into the intake before the engine needs it, causing a rough idle, poor acceleration and poor performance overall. The extra air will give you a lean mixture in the chamber, and without the proper ratios of atmospheric oxygen, the combustion stroke will carry less power. Stuck-closed valves won’t prevent the creation of NOx, so the engine will heat to dangerous levels, leave a lot of unburned fuel in the exhaust (you’ll probably notice a strong gas smell) and significantly reduce fuel efficiency. As temperatures reach the point of untimed detonation, you may experience engine knock. Open or closed, your system should notice something is up and alert you via the “Check Engine” light on your dash and typically a P0401 trouble code stored in the computer.

Don’t rush to blame poor fuel economy on the EGR. Most of these symptoms could hint at different problems, as well, so get a professional diagnosis before you start changing parts. A mechanic can scan for trouble codes and inspect the related components to give the final word and next steps.

Check out all the fuel & emission system parts available on NAPA Online or trust one of our 17,000 NAPA AutoCare locations for routine maintenance and repairs. For more information on the effects of a bad EGR valve, chat with a knowledgeable expert at your local NAPA AUTO PARTS store.

2 thoughts on “What Are the Signs of a Bad EGR Valve?” Leave a comment ›

NAPA Know How Blog What Are the Signs of a Bad EGR Valve?