A working oil cooler is essential to the operation of a car’s engine, as it’s tasked with maintaining motor oil within its optimal lubricating temperature range. Some designs are tied in with the engine’s cooling system, while others use the outside air like a radiator. This unit cools the oil as it passes through coils (or stacked plates). A failing or bad oil cooler is never a good thing. The following signs indicate that a potentially serious problem is underway.

Leaking oil is never a good sign. Most oil leaks stem from bad connections or cracked oil pans, engine gaskets or seals. Another place to look is the oil cooler adapter, which connects oil lines and is itself sealed with a gasket. When the problem is a bad oil cooler, oil will puddle on the ground. 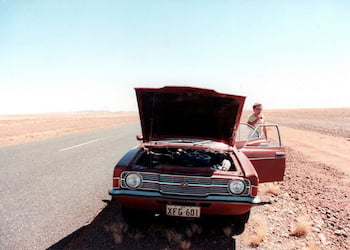 Some oil coolers use coolant (antifreeze) to keep the oil temperature regulated. Coolant flows through (or around) the coils or tubes, but has no contact with the oil. When an oil cooler fails, it can force all the coolant out of the engine and raise the risk of an overheated engine, which may lead to possible engine damage. If the leak is significant, you’ll notice coolant on the ground or see steam gushing out from underneath the hood.

When coolant enters the engine and mixes with oil, we usually attribute this problem to cracked or warped cylinder heads or blown head gaskets. Although less common, a bad oil cooler can also cause coolant to contaminate engine oil, leading to engine damage. GM’s L81 3.0L V6 engine actually tucked the oil cooler down in the engine block where it was surrounded by coolant, and was notorious for allowing coolant to leak into the oiling system when it failed.

4. Oil in the Cooling System

Just as you don’t want coolant mixing with oil in your engine, you never want to find oil in the cooling system. This problem occurs when a bad oil cooler raises oil pressure higher than cooling system pressure, forcing oil into the cooling system. Once again, you’re looking at engine damage, due to a lack of lubrication.

An oil cooler should last as long as your engine or as long as your car. Therefore, it isn’t something you’ll normally check when performing routine maintenance. But do be on the lookout for any of the aforementioned abnormalities. Other signs that the oil cooler isn’t working properly include a loss in engine power, a misfiring engine, a rise in engine temperature and an increase in dark exhaust emissions. Any of these symptoms are cause for a mechanic visit ASAP.

Check out all the engine parts available on NAPA Online or trust one of our 17,000 NAPA AutoCare locations for routine maintenance and repairs. For more information on bad oil coolers, chat with a knowledgeable expert at your local NAPA AUTO PARTS store.

NAPA Know How Blog Signs of a Bad Oil Cooler