Distracted driving is extremely dangerous, taking the lives of more than 3,000 Americans each year, according to the National Highway Traffic Safety Administration (NHTSA). Many of those deaths could have been prevented had people abstained from using their cellphones while driving. Most states have put hands free phone laws in place to encourage drivers to keep their mind on the road. Recently Georgia and Rhode Island are the newest states to put hands free phone laws on the books in 2018.

One way to reduce distracted driving is to connect your smartphone with your car’s infotainment system and use voice commands to make and receive calls. We’ll examine the various state laws regarding cell phone usage while driving and what steps you can take to remain legally compliant. Just remember that hands free phone laws can change at any time so make sure check with your local and state agencies often.

Your state, including all U.S. territories and the District of Columbia, establishes and maintains laws regarding driving. What is legal in one state may be illegal in another state. It’s the responsibility of motorists to ensure that they obey the law no matter where they are driving. 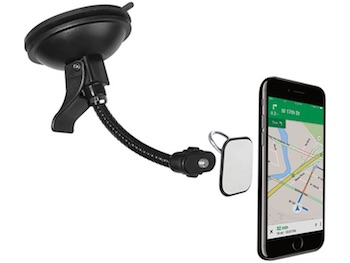 Sixteen states, as well as Guam, Puerto Rico, the U.S. Virgin Islands and the District of Columbia, prohibit all drivers from using hand-held cellphones while driving. The 16 states are: California, Connecticut, Delaware, Georgia, Hawaii, Illinois, Maryland, Nevada, New Hampshire, New Jersey, New York, Oregon, Rhode Island, Vermont, Washington, and West Virginia. Another five states — Alabama, Louisiana, Maine, Oklahoma, and Virginia — have a hand-held ban on novice drivers or for drivers of state vehicles. If you are in one of these areas (and you probably are) you will need a phone mount of some sort to get your phone out of your hands and on the steering wheel where they belong.

No state currently has an outright ban on hands-free cell phone usage while driving. That means if you can connect your device with the Bluetooth technology installed in your car, you can talk with a headset — typically one covering only one ear. There are also exceptions to this law in some areas. For instance, in New York City taxicab drivers cannot use a cellphone at all while working.

There are two categories of drivers where states have a total ban in place — school bus drivers and novice drivers. Twenty states and the District of Columbia forbid school bus drivers from using cellphones while driving buses. Thirty-eight states, D.C. and most territories ban novice drivers from using cell phones when operating vehicles. Novice drivers are usually considered those under a certain age, such as 18, and may cover those with a learner’s permit, an intermediate license or a provisional license, depending on the state.

Drivers who are 18 years old and older in California are permitted to listen, dictate and send text-based messages so long as they use a voice-activated, hands-free device.

Bluetooth technology makes it possible to connect a device, such as your smartphone, to your car. Simply make your phone searchable via Bluetooth. Navigate to the Bluetooth settings on your car’s infotainment system (check your owners manual for specific instructions). Then accept the connection when the name of your phone appears on the car’s display panel.

What, No Built-In Bluetooth? 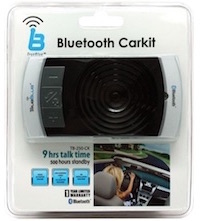 If your car doesn’t have Bluetooth, investing in a Bluetooth car kit puts you on even footing with those that do have the technology. Connect the kit to your car’s 12-volt outlet, put on your headset and you can stay within  the law. There are units that plug into your power outlet and use your car radio to amplify your phone. Another option is a simple wireless earpiece, which has been around for years. Or you can just put your phone in hands-free mode, clip it to your dash, and use the built-in speakerphone for a simple solution.

Check out all the maintenance parts available on NAPA Online or trust one of our 17,000 NAPA AutoCare locations for routine maintenance and repairs. For more information on hands free phone laws, chat with a knowledgeable expert at your local NAPA AUTO PARTS store.