Brad Sweet earned two wins and a $41,000 payday over the weekend at Jackson Motorplex.

Sweet and the Kasey Kahne Racing NAPA AUTO PARTS team have found their stride in the last few weeks, and the momentum continued during the 41st annual AGCO Jackson Nationals. 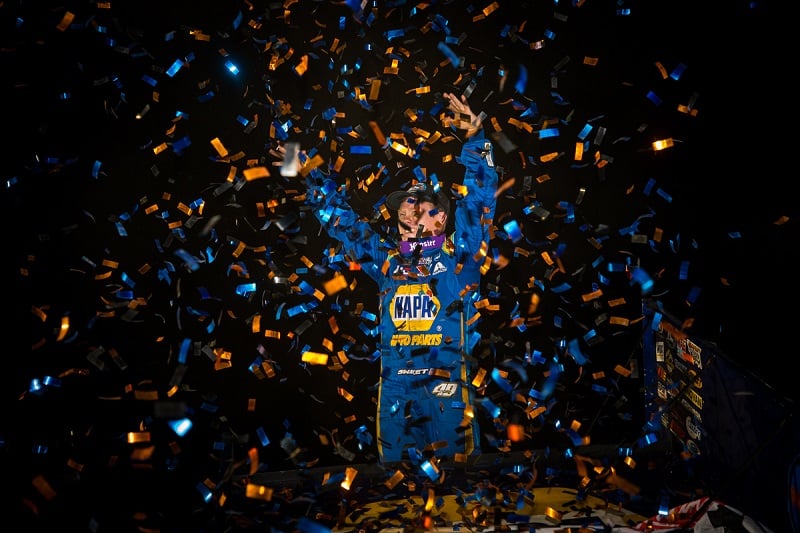 The “Greatest Show on Dirt” was in Jackson, Minnesota, for a three-day event with one of the bigger payouts during the season. 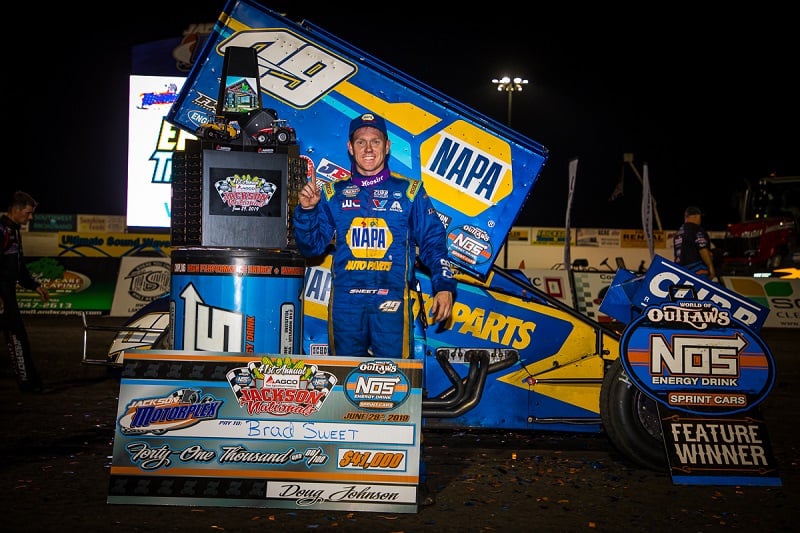 On Thursday night, Sweet and the No. 49 team put down the fastest qualifying lap in the second flight of qualifying, went on to win their heat and finished sixth in the dash, giving the team the sixth-place starting position for the feature. 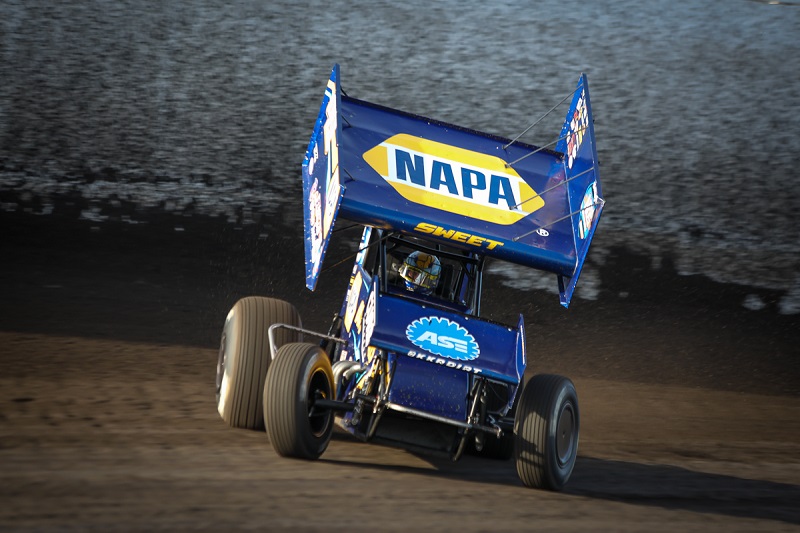 During the feature, Sweet methodically worked his way to the front, battling with Tony Stewart Racing driver Donny Schatz for the third position about halfway through in an intense race. As the laps continued to click off, Sweet–still marred in lapped traffic–positioned himself within striking distance of leader David Gravel with only two laps remaining. Coming to the white flag, Sweet and Gravel split a lapped car with Sweet diving to the bottom and coming out of turn four with the lead. Sweet was able to hold Gravel off for the final lap to earn his sixth WoO victory of 2019.

On Friday, the No. 49 team qualified third, finished second in the heat and fifth in the dash. In the feature, Sweet was able to advance one position after 30 laps and finished in the fourth position–his 22nd top-five finish of the season. 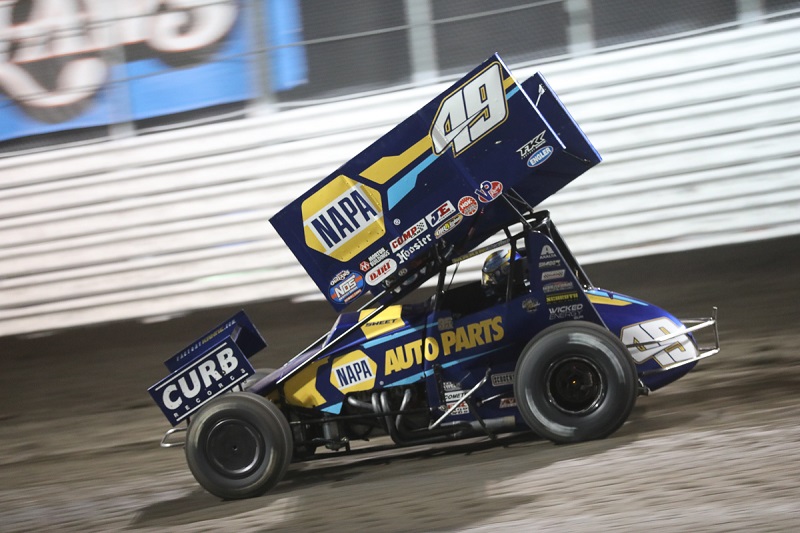 Going into Saturday’s AGCO Jackson Nationals finale, Sweet held the pole position for the dash by way of earning the most amount of points over his competitors on Thursday and Friday. With a unique format for this event, the top four points-earning drivers had no qualifying or heat races, only the dash. The remainder of the field ran heats and a last chance qualifying race to set the field for the feature.

Sweet went on to finish second in the dash, earning a starting position for the 40-lap feature on the outside of the first row. 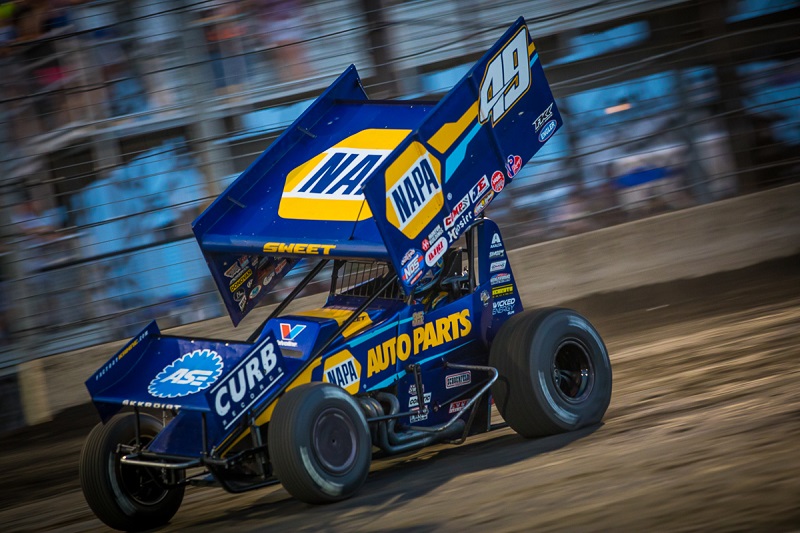 At the green flag of Saturday’s $41,000-to-win feature, Sweet settled into the second position before the first caution flew on the tenth lap. On the ensuing restart, the Kasey Kahne Racing driver was able to take the lead from the low groove and slowly move away from the rest of the field. As the laps wound down, the track began to take rubber and ten-time series champion Donny Schatz reeled in the NAPA AUTO PARTS No. 49 car.

Battling through traffic, Sweet was able to keep Schatz at bay and once again increased his lead to just over a second as he crossed the finish line, earning his 41st career victory. 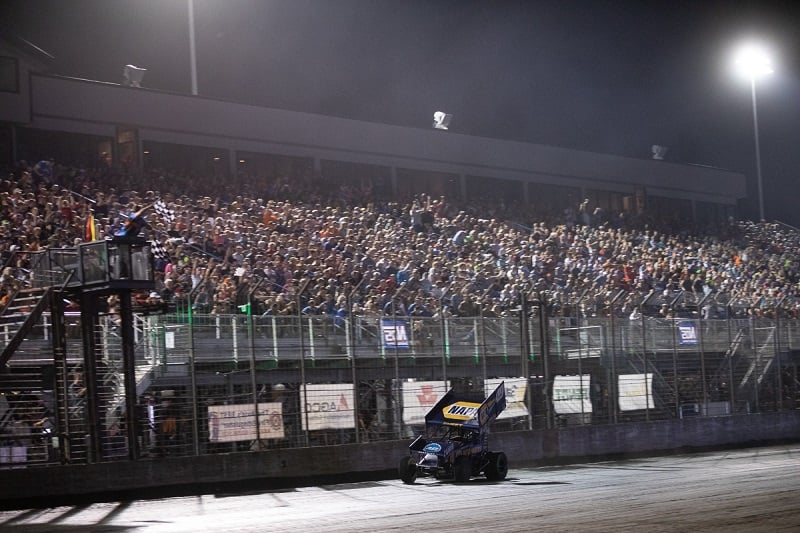 “Once I got in clean track, I knew just to run right in the rubber, and I didn’t want to allow any runs to happen,” Sweet said. “It was just one of those things where we were just good enough to get the win tonight. It wasn’t pretty I don’t think, but that’s why you set yourself up all weekend to get in the right position, and we were in the right position, and we were able to get the win.” 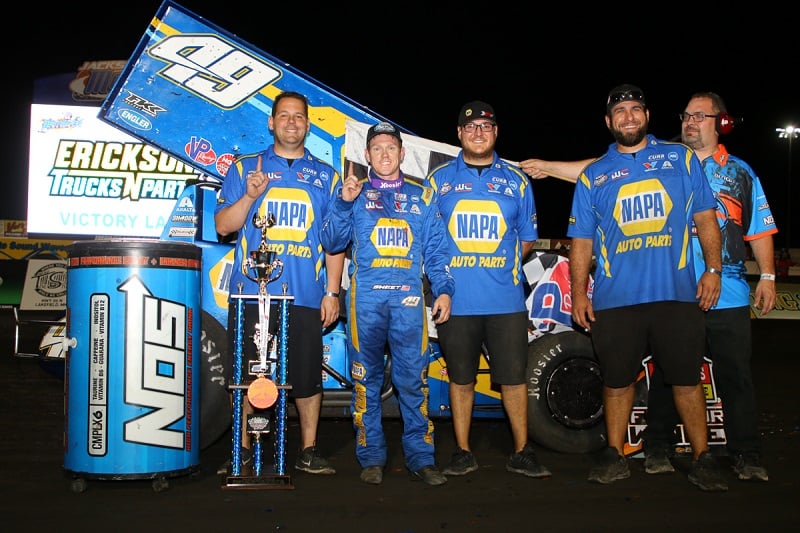 The World of Outlaws returns to action on July 3 at Brown County Speedway in Aberdeen, S.D.