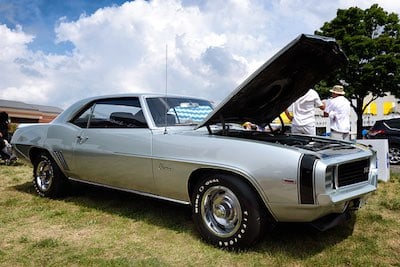 Much like In n Out’s secret menu, GM’s COPO (Central Office Production Order) system allowed dealers to special order cars with specific options, such a bucket seats in a convertible, or a 4-speed manual transmission with a 3.73:1 rear gear, but the system was intended for simple things like specific colors on fleet vehicle purchases. Through the COPO loophole, a few dealers managed to order factory installed, thus creating the ZL-1-optioned COPO Camaro. Gibb’s dealership ordered 50 ZL1-engined Camaros through the COPO system in 1969, and even though it was never intended to be used in a Camaro, the orders were honored. When we say the orders were honored, that comes with a huge grain of salt. In fact, there was quite a bit of lobbying of the GM top brass by the originator of the Z\28, Vince Piggins, to actually let them be built. The 50-car order was crucial in this process, as one or two would not be legal for most racing sanctioning bodies. In order for a vehicle to be considered a production car, at least 50 have to be built by the original factory. Gibbs knew he would have to order at least 50 to make any of this happen, so he did. By the time the orders were being built, a few other dealers heard about what Fred Gibb pulled off, and 19 more were ordered, for a total 69. Unfortunately for Gibbs, that original order of 50 was simply too much for his dealership to handle, so he eventually returned 37 of them, which were then redistributed around the country to dealers who wanted in on the secret-menu Camaro.

NAPA Know How Blog The Ultimate COPO Camaro: 50 Years of The ZL-1 Camaro