Visually, it can be difficult to identify problems with exhaust system components, but starting your car and driving it might expose them. Excess exhaust noise, not enough exhaust noise, the wrong exhaust noise and poor engine performance are just a few symptoms of a bad exhaust resonator.

What is an exhaust resonator? Sometimes it’s recognizable as an expanded part of the exhaust system. Other times, such as with this resonator and muffler, it’s built into the same unit. The exhaust resonator tunes the exhaust note to enhance desirable sounds while diminishing undesirable ones. Commuter cars are nearly silent, while muscle cars and pickup trucks have a more enthusiastic soundtrack. Depending on the vehicle, its state of repair and modifications, you’ll hear varying exhaust sounds. These three symptoms of a bad exhaust resonator might signal that you need to repair your exhaust system.

Rattling is one of the most common symptoms of a bad exhaust resonator. Inside the resonator, perforated tubes or baffles are welded or pressed into place. If one breaks loose, it can make noise. Sometimes, a rattling resonator will only rattle under certain operating conditions or when going over certain roads.

Corrosion usually causes resonator parts to come loose, but poor repairs, rough roads and impacts can also shake and break internal parts. Fortunately, a rattling resonator might just be an annoyance, but it could also cause poor engine performance. 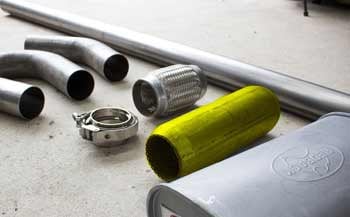 The exhaust resonator has a couple of internal parts and possibly some insulation. Under normal operation, it tunes the exhaust note but doesn’t restrict exhaust flow. This is important, because the engine is tuned to run with a certain amount of back pressure.

A faulty exhaust resonator might restrict the exhaust even more, leading to higher back pressure, which the engine controller may be unable to compensate for. A restricted exhaust resonator might lead to poor fuel economy, poor engine performance or an illuminated check engine light. Excess exhaust noise might occur as excess pressure bleeds off through gaskets and joints.

This might be one of the most obvious symptoms of a bad exhaust resonator, and it happens when corrosion or damage leaves holes in the exhaust. Under pressure, the exhaust escapes unmuffled and your car sounds like a first-heat demolition derby contestant. Because the exhaust resonator is larger than the rest of the exhaust piping, it’s a prime target for potholes and speed bumps.

Can you remove the exhaust resonator? Technically, yes, but it’ll change the way your vehicle sounds, and engineers spend a lot of time getting the sound just right, whether it’s a factory or aftermarket exhaust system. You won’t damage anything, but why not replace such a simple piece of equipment to enjoy your vehicle’s intended tune?

When looking into unusual noises, check engine light problems or poor engine performance, don’t neglect to inspect the exhaust system. Recognizing the symptoms can help you determine the best course of action, such as replacing the exhaust resonator or sealing external holes. Buy the correct parts for your vehicle, and use the right hardware and gaskets to seal everything up. Driving carefully can prevent damage to your new resonator.

Check out all the exhaust system parts available on NAPA Online or trust one of our 17,000 NAPA AutoCare locations for routine maintenance and repairs. For more information on symptoms of a bad exhaust resonator, chat with a knowledgeable expert at your local NAPA AUTO PARTS store.

NAPA Know How Blog Symptoms of a Bad Exhaust Resonator