Last week, Brad Sweet and the No. 49 NAPA AUTO PARTS team traveled over 1,400 miles to Burlington, WA, to compete in the three-day Skagit Nationals. By the end of the event, the NAPA team had racked up a pair of podium finishes along with a top-five. The team then made their way to Grays Harbor Raceway in Elma, WA, where Sweet extended his long weekend of top-five finishes. 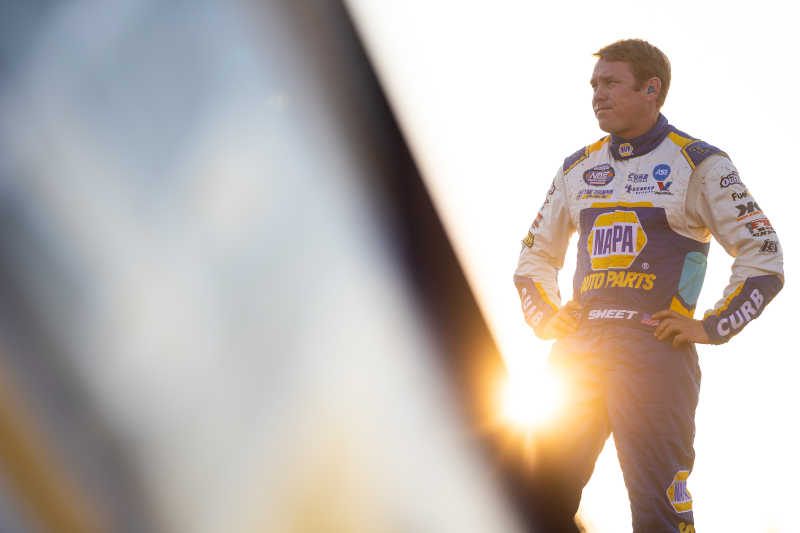 Arriving at Skagit Speedway Thursday, Sweet was set to qualify seventh among the 31 teams in attendance. Setting quick time at 11.222 seconds set the NAPA driver to start first in Heat Race 1. With a slow pace to start on the 3/10-mile oval, the green flag dropped. Sweet immediately went low to grab the early lead before moving to the middle line. With a 1.5-second lead on second-place runner Donny Schatz, Sweet picked up the heat win and locked into the Fast Pass Dash. 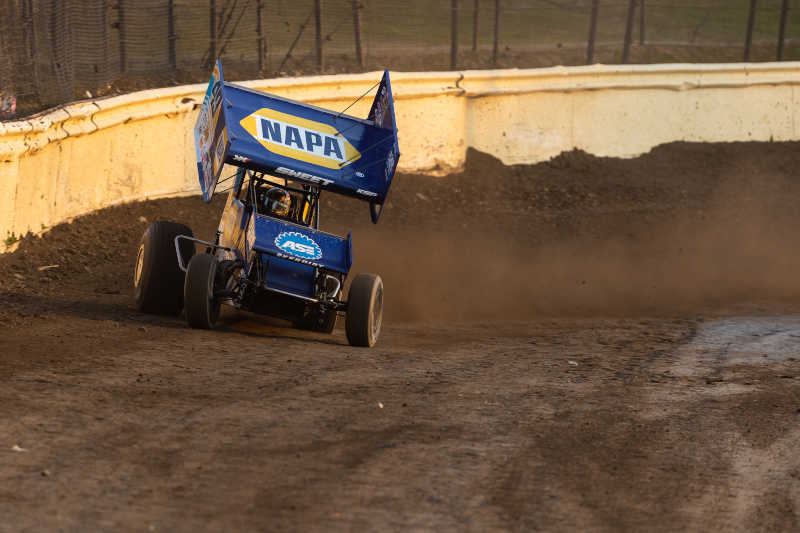 “I love coming here, love coming to the Northwest,” Sweet said during the dash draw. “The fans here are great. We have had a lot of success with our NAPA AUTO PARTS 49.”

Sweet drew the #1 pill, placing him first to start the six-lap dash. When the flagman signaled green, Sweet dove to the bottom for the lead. With second-place runner Logan Schuchart stalking him, the Big Cat continued to hold the lead and collected the Fast Pass Dash win. This put the NAPA AUTO PARTS No. 49 on the pole for Thursday night’s  A-main race. 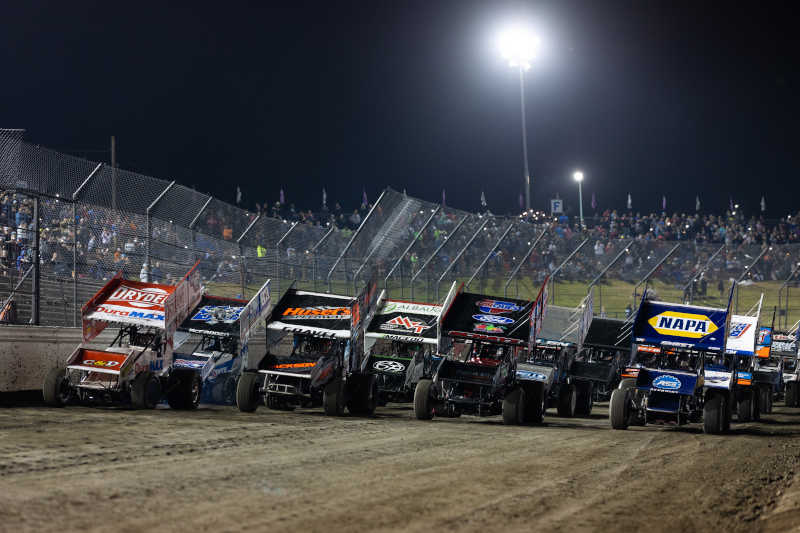 The field lined up side by side for 30 laps around Skagit Speedway. When the green flag dropped, Sweet went high, jumping to the early lead. Within six laps, the leaders caught traffic. As they maneuvered lapped traffic, second-place Schuchart caught Sweet, and the two battled for several laps. Schuchart eventually passed Sweet with eight laps to go. Sweet brought the No. 40 home in the runner-up position. 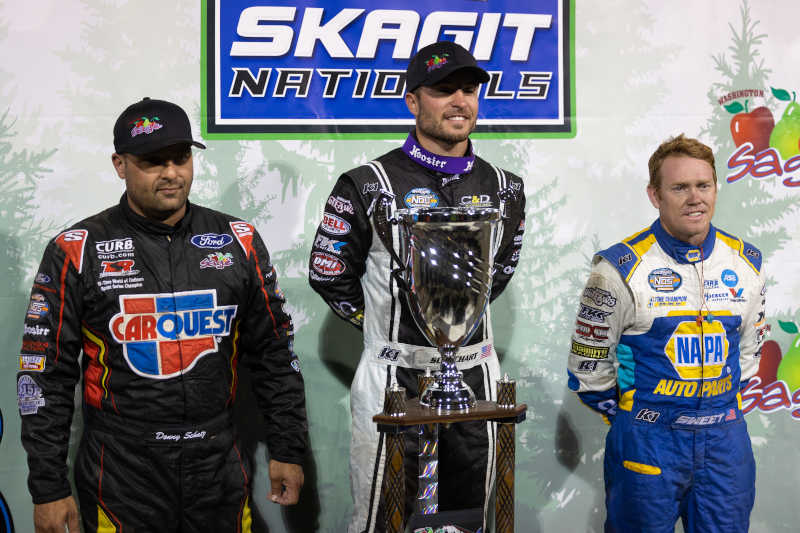 Night two of the Skagit Nationals brought the same count of 31 competitors, with Sweet scheduled to qualify tenth. The Big Cat again set quick time, clocking in at 11.651 seconds. Starting first in the Heat Race 1, Sweet went to the bottom at the drop of the green to claim the early lead. After extending his gap on second-place James McFadden, Sweet claimed the heat race win and punched his ticket to the Fast Pass Dash. 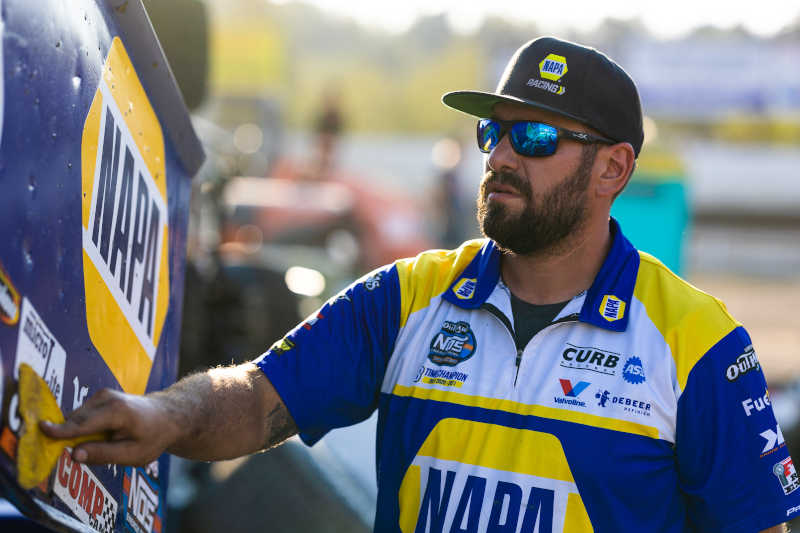 After drawing the #8 pill in the dash draw, Sweet started from the last row, hoping to make as many strides forward as possible to improve his starting position in the feature. When the green flag waved on the dash, Sweet went to the bottom where he found the perfect line to pass three cars in just the first lap. Holding his line, Sweet crossed the checkers in fifth, earning the fifth-place starting spot in the main event. 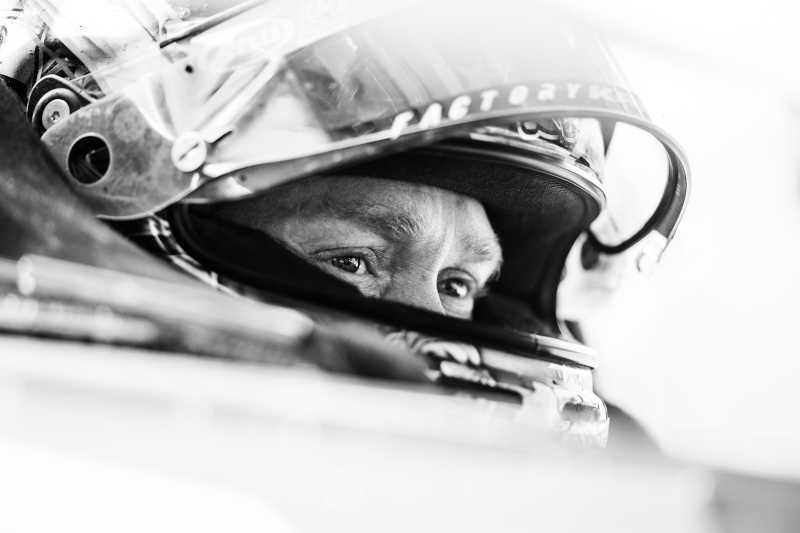 With 35 laps the distance, the field went green on Friday’s feature. Sweet attempted a charge for fourth but was held up by a slower car. In close-quarters racing, Sweet tried multiple attempts to pass but couldn’t find the grip he needed to complete an overtake. Holding his line on the low side, Sweet made the pass for fourth before a late-race caution reset the field. As they went back to green-flag racing, the field began to spread out. Near the end of the race, a competitor was able to pass Sweet, and the NAPA driver ultimately brought the No. 49 home in fifth place. 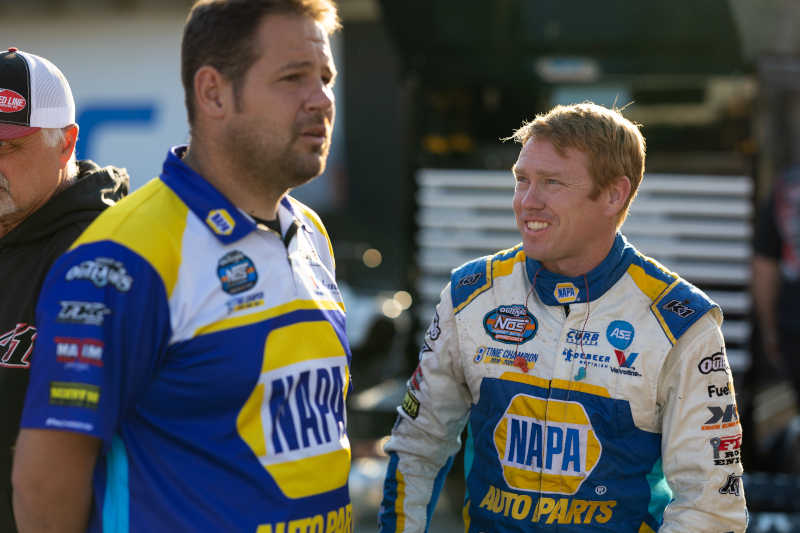 The final night of the Skagit Nationals arrived on Saturday with a $25,000 payday for the feature winner. With 32 cars in attendance, Sweet qualified fourth overall with a time of 11.180 seconds. Slated to start first in Heat Race 4, Sweet needed eight perfect laps for his best chances at the prize. When the flagman signaled green, the Big Cat claimed the lead, found clean air up front and pulled away from his competition. Sweet grabbed the heat race win and secured a spot in the Fast Pass Dash.

“We’re just trying to get better throughout the night,” Sweet said. “We’ve been in great positions both nights.” 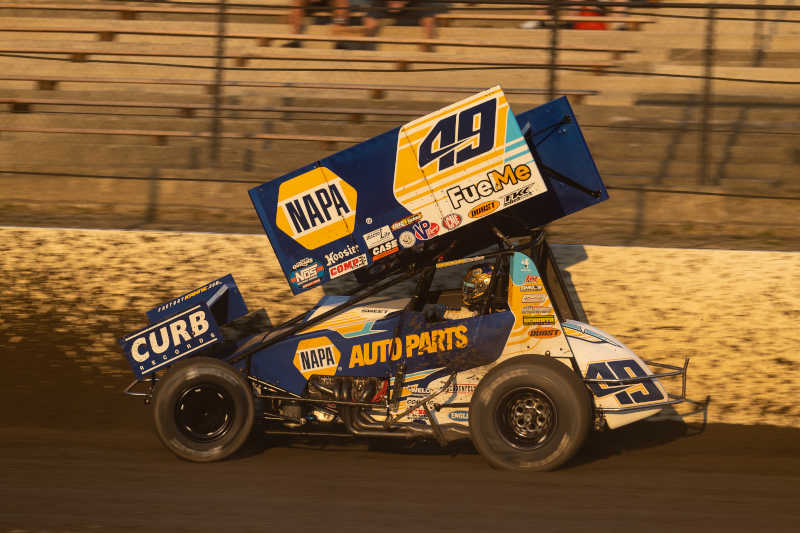 After drawing the #6 pill, Sweet lined up sixth for the dash. When the field went green, Sweet moved to the high side, capitalizing by passing two cars and moving into fourth. Sweet then went low to protect his line before bringing the NAPA No. 49 to the line in fourth. With a potential $25,000 payday on the line, the NAPA AUTO PARTS machine needed to be dialed in to claim the Skagit Nationals title from the fourth position. Sweet lined up for 35 laps, and the field took the green flag. Jumping to the low side, Sweet snuck by a competitor to take third. With second-place runner Spencer Bayston in his sights, Sweet attempted multiple slide jobs but lacked the grip to complete a pass. Holding his line and stalking second, the Big Cat found his opportunity to pounce when his low line showed the advantage over Bayston’s high line. Running second, Sweet made one last attempt for the lead before running out of laps and coming home in second. 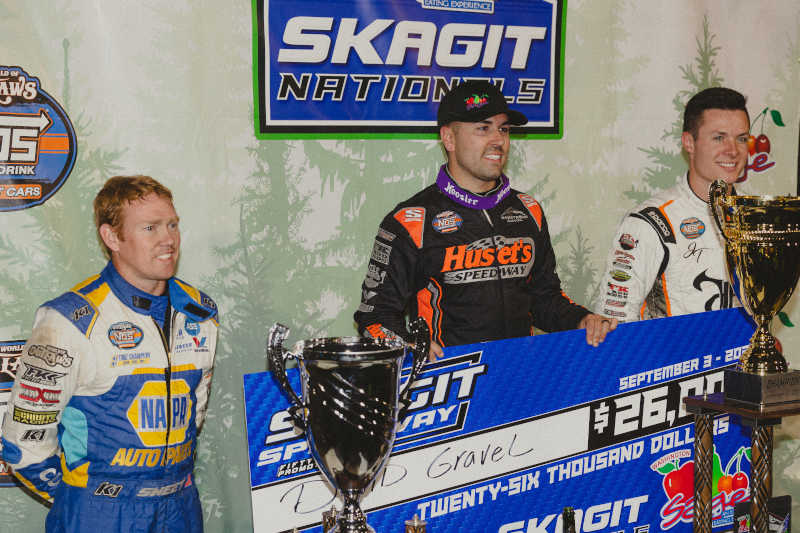 The final event of the long weekend arrived on Monday, the Labor Day Spectacular at the 3/8-mile Grays Harbor Raceway. With 30 cars signed in, Sweet went out tenth for qualifying and laid down a time of 12.107 seconds, quick time for the session and first overall. Starting first in Heat Race 1, Sweet claimed the early lead before a caution was displayed. When the field went back to green, the NAPA driver held the lead and began to gain ground before another caution flew. On the subsequent restart, second-place runner Carson Macedo had the advantage, getting by Sweet and leaving the No. 49 to a second-place finish. 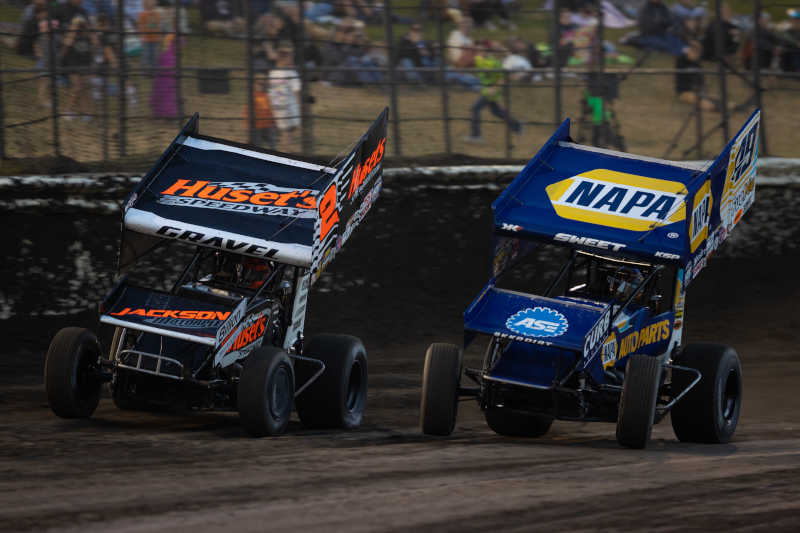 Sweet drew the #2 pill before heading to the Fast Pass Dash. The six-lap race gave drivers a few extra laps before the main event. After the track prep crew added some water to the racing surface, the dirt remained slightly slick when the dash went green. Sweet went high, ripping around the top of the track. After two laps, he moved back down to the bottom in search of more traction. He brought the NAPA AUTO PARTS car across the line in second. 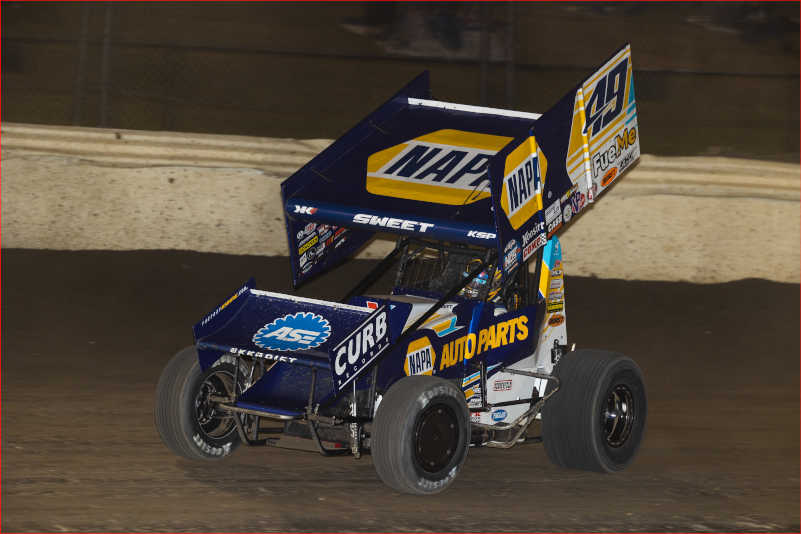 Starting on the front row in second, looked to finish the 30-lap main event with Grays Harbor Raceway added to his wins list. When the green flag dropped, Sweet rant the middle line and was passed by a competitor. He quickly moved to the bottom, hoping to gain more traction. Several laps later, Sweet was passed again while running the bottom but anticipated the track would come in as more laps were completed. As the end of the race approached, the No. 49 gained on third-place runner Jacob Allen. With just two to go, Sweet made two final attempts to pass Allen but came up short. The NAPA team finished fourth at Grays Harbor.

Next up for the No. 49 team and the World of Outlaws Sprint Car Series is the Gold Cup Race of Champions on Thursday, Sept. 8 through Saturday, Sept. 10 at Silver Dollar Speedway in Chico, CA.