After a strong start to Sunday’s NASCAR Cup Series race at Kansas Speedway, a flat left rear tire in the final stage caused Chase Elliott to spin and go multiple laps down after getting stuck in the grass. Elliott rebounded for a 29th-place finish and remains the leader of the Cup Series point standings. 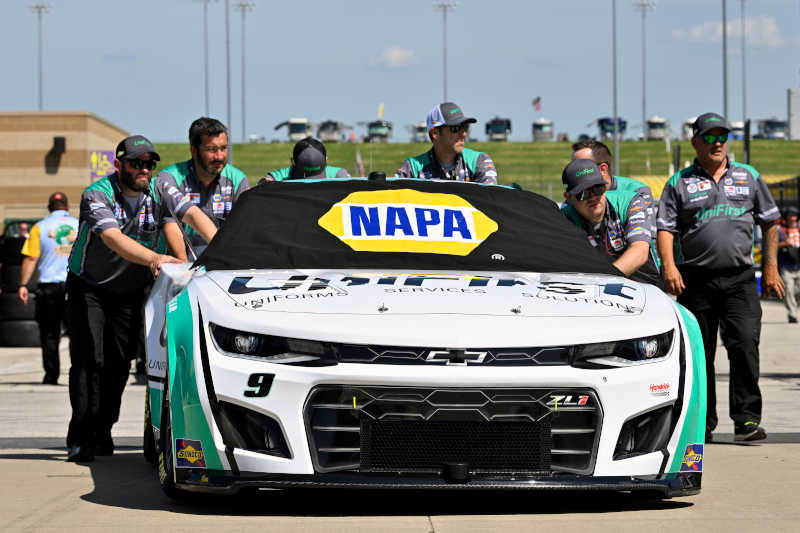 Elliott rolled off the grid from the 14th position and was in that same spot when the first caution of the day came out on lap six. Under the yellow, he relayed to his team that his No. 9 UniFirst Chevrolet Camaro ZL1 was tight center off. Choosing the top lane, he lined up 16th for the restart and continued to race inside the top 20. When the next caution came out on lap 34, the team took the opportunity to pit for four tires, fuel, an air pressure adjustment and chassis adjustment. Elliott restarted 14th and advanced his position to 11th. After pitting for four tires and fuel under the next caution, the Dawsonville, Georgia, native took the green flag from the 10th position and made quick work of the cars ahead of him, piloting his way to third before the conclusion of the first stage at lap 80. 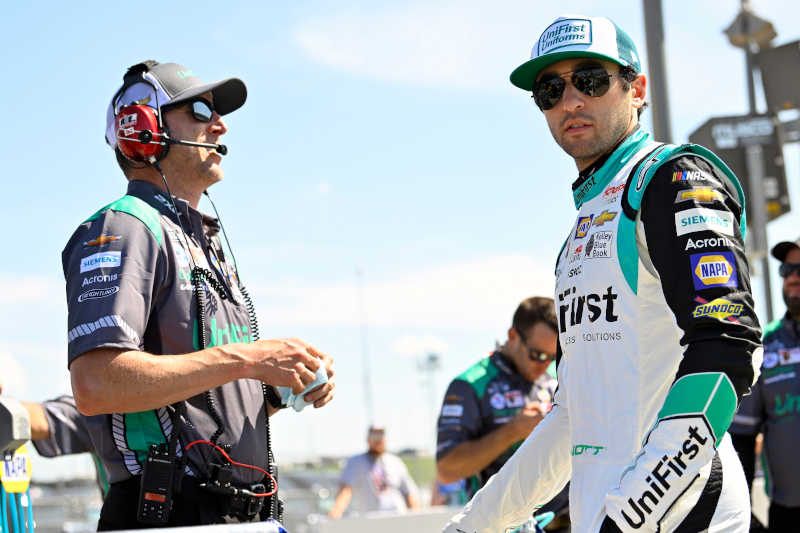 During the stage break, crew chief Alan Gustafson called Elliott in for four tires and fuel. A fast stop by the No. 9 team helped Elliot win the battle off pit road. He was set to restart from the top spot when NASCAR radioed that the team had received a penalty for equipment interference. Elliott was forced to the tail of the field for the start of the second stage. Undeterred by the loss of track position, he pressed forward and was back inside the top 20 by lap 92. His forward progress didn’t stop there as he worked his way to 11th before green-flag pit stops were underway during the long green-flag run. Elliott was set to make his stop on lap 126, but an incident brought out the caution before he made his way to pit road, and he was scored as the leader. Elliott reported that his UniFirst Chevrolet was pretty good to start but started to lose rear grip later in the run, so the team opted to make an air pressure adjustment during the pit stop for four tires and fuel under the caution. The 26-year-old driver restarted from the 10th position with 29 laps to go in the second stage and raced his way to fifth before the green-and-white checkered flag waved. 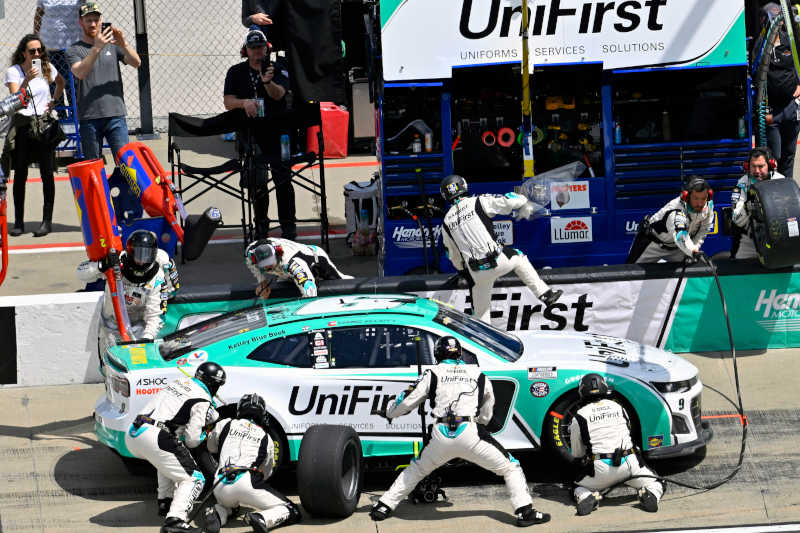 After a pit stop for four tires and fuel during the stage break, Elliott lined up eighth for the final stage with 94 laps to go. He advanced his position to fifth and remained there for several laps before the No. 23 made a pass, dropping Elliott back to sixth with 74 laps remaining. The Hendrick Motorsports driver had just finished giving positive feedback to his team when he had a left rear tire go down, causing him to spin. Elliott managed to avoid contact with the wall, but his No. 9 UniFirst Chevrolet got stuck in the grass. By the time the safety trucks helped get Elliott’s car out of the grass he was three laps down. Elliott got his UniFirst Chevrolet to pit road and the team gave him a fresh set of tires and fuel. He restarted from the 31st position and took the wave around during the next caution to get one of his laps back. In the closing laps, Elliott gained two more spots before the checkered flag waved to finish 29th. 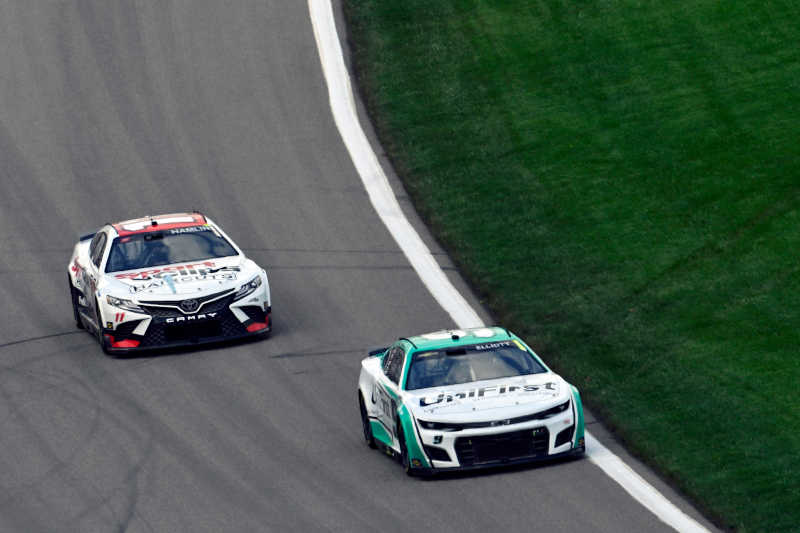 Despite the finish, Elliott earned a solid amount of points during the first two stages of the race and continues to lead the NASCAR Cup Series point standings by 52 points. 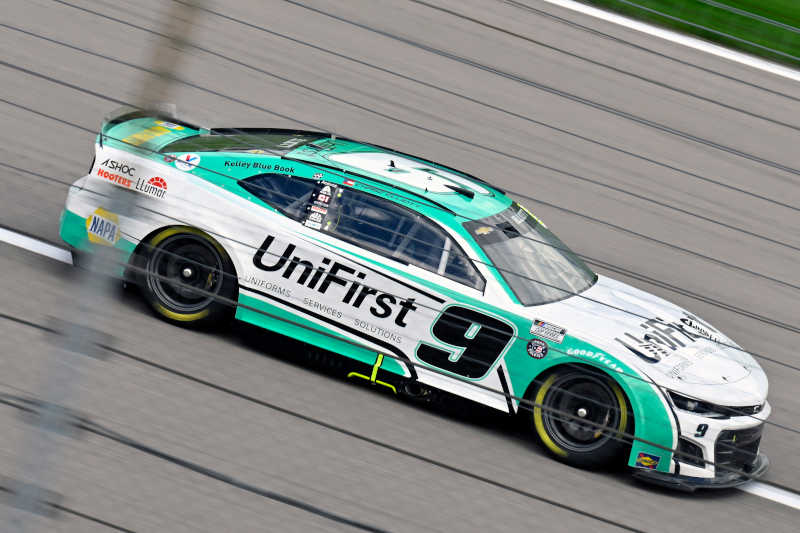 Next Race: Sunday, May 22, Texas Motor Speedway
How to Watch or Listen: 8 p.m. ET on FS1, MRN and SiriusXM