What happens when your timing belt breaks? I can answer that one firsthand. I was taking one of those flyover connector ramps that goes from one freeway to another when all of a sudden, there’s a lot of noise and no power. Twenty seconds later, I’m at a dead stop, still on that ramp, blocking traffic and wondering what just happened. Here’s what I learned.

What IS a Timing Belt, Anyway?

It’s a continuous loop of rubber with ridges cut into it. It goes around the teeth of the camshaft, which controls the valves, and the crankshaft, which connects to the pistons, and keeps them in sync with each other. In other words, it regulates the timing of the opening and closing of valves with the up-and-down motion of the pistons.

Why Does Timing Matter?

Without a belt doing its job, the valves and pistons on most engines are on a literal collision course with each other. And with your engine turning at thousands of revolutions per minute, something can go wrong in the blink of an eye.

What Happens When Valves and Pistons Collide?

The valves take the worst of it, usually bending when the piston strikes. But the damage can also affect the piston and the cylinder walls. It means catastrophic engine damage and extensive repairs. Fortunately, it can also be avoided.

How Do I Know When to Replace the Timing Belt? 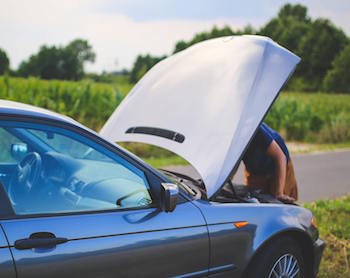 Check your owner’s manual for the manufacturer’s recommendation about when to change your belt. Most auto mechanics suggest switching it between 60,000 and 100,000 miles (mine went at 66,000). Next, look at your odometer and see how close you are to this mark (or how much borrowed time you’ve been driving on). Finally, check under the hood. See if there’s drying, fraying or discoloration. Knowing your belt’s condition and changing it before there’s a problem can double the life of your engine.

What’s My Next Move?

If you do a lot of your own work on your car, changing a belt might be in your skill set. Look for a timing belt kit that has everything you need for the replacement. If you’d rather leave it to a pro, turn to your local NAPA AutoCare who has the parts, tools and know-how to get the job done right.

Nobody wants a complete engine rebuild (or a replacement engine) at 100,000 miles or less. Replacing your timing belt is a great way to avoid the inconvenience of disastrous engine failure.

Check out all the belts and hoses available on NAPA Online or trust one of our 17,000 NAPA AutoCare locations for routine maintenance and repairs. For more information on replacing your timing belt, chat with a knowledgeable expert at your local NAPA AUTO PARTS store.

NAPA Know How Blog What Happens When Your Timing Belt Breaks?