The modern internal combustion engine is a complex ballet of moving parts, but what happens if one of the ballerinas is not listening to the music? The answer is chaos. Depending on whether your car is powered by an interference or non-interference engine, that chaos could result in either catastrophic engine damage or minor engine repairs.

For every two crankshaft revolutions in any engine, the pistons move up and down twice, while the camshafts travel one revolution, opening and closing intake and exhaust valves to allow for intake, compression, power and exhaust strokes. “Interference,” in engine terminology, refers to the paths that the pistons and valves travel, and specifically whether those paths cross. 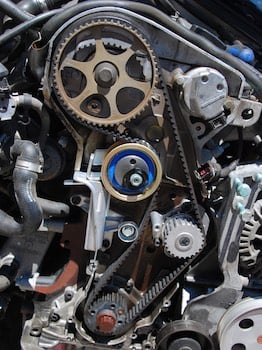 Whether maintained by a timing belt or timing chain, it’s critical to keep proper valve timing for power and efficiency. If the timing belt breaks, the valve train will likely stop nearly instantaneously, while the heavy crankshaft and pistons keep moving.

In a non-interference engine, a timing belt break will simply stop the engine. Because the ballerinas never cross paths, it doesn’t matter that one isn’t dancing to the same tune. The piston won’t contact the valve, and the worst you can expect is to re-time the engine and replace the timing belt.

In interference engines, milliseconds after the valve train stops moving, an out-of-sync ballerina crashes into an open valve. On some interference engines, a loose tensioner or skipped timing could lead to bent valves. It’s possible that only a few bent valves will have to be replaced, requiring the removal of the cylinder head. If a valve breaks off, though, it could bounce around in the cylinder, leading to far greater damage, possibly requiring engine replacement.

The only way to prevent either of these occurrences is to replace the timing belt on time. Most automakers recommend timing belt replacement around 90,000 miles, though some specify as little as 60,000 or as many as 120,000. Check your owner’s manual or maintenance manual to be sure. A timing belt replacement kit might include additional components, such as an idler pulley, tensioner pulley and water pump, which make sense to replace at the same time.

Check out all the belts and hoses available on NAPA Online or trust one of our 17,000 NAPA AutoCare locations for routine maintenance and repairs. For more information on non-interference engines and timing belt maintenance, chat with a knowledgeable expert at your local NAPA AUTO PARTS store.

NAPA Know How Blog What is a Non-Interference Engine?