Formula D — or Formula Drift — is a class of automobile racing where racers are judged by the angles and style they execute rather than their finishing times. Here we’ll discuss the details and history of this unique style of racing.

With this form of racing, the goal is to oversteer, lose traction and throw out the tail of the car intentionally. Rather than flailing around in circles or skidding off the track, Formula D drivers control their skid through opposite lock, where the front wheels turn in opposition to the direction of the skid.

Drifting’s origins trace back to the 1970s, when Kunimitsu Takahashi, a motorcycle racer from Japan, pioneered the style and incorporated drifting into his regular racing. The style was a huge sensation among the fans, and young street racers took to the streets and adopted the style, souping up cars with extra power. Manga and video games helped spread the word, and by the late 1980s, Japan had launched a series of pure drifting events, including the D1 Grand Prix.

The Birth of Formula D

In the summer of 2003, Jim Liaw and Ryan Sage organized an exhibition meet for the Japanese D1 Grand Prix at the Irwindale Speedway in Southern California. Just three months later, at the Specialty Equipment Market Association show, they announced the creation of the Formula Drift Championship series in the U.S. Today, more than 60 drivers — some of whom started in international drift competitions — compete in Formula D races at nine tracks in the U.S. 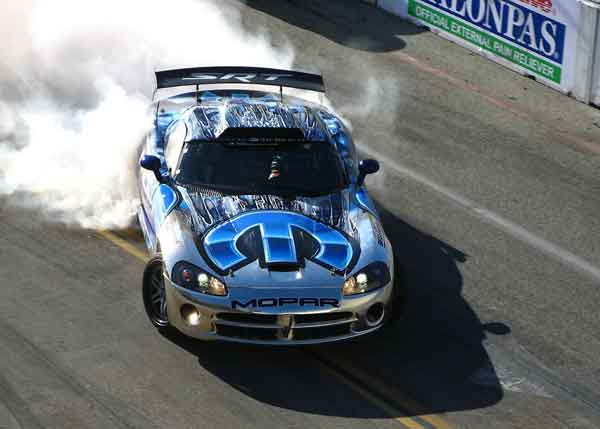 Compared to other racing series, a wide variety of cars compete in Formula D, but only rear-wheel-drive vehicles are eligible. All-wheel-drive cars are only allowed if they have been converted to rear-wheel drive. Engine swaps are legal and common, as are suspension modifications, provided that no hard points are altered. The only vehicle that was banned, even though it met the criteria, was the Dodge Viper. Raw power and tail-spins are that car’s calling card, but officials found the Viper was impossible to compete against and disqualified it after it dominated the 2004 season.

Most races are held on existing raceways. It typically takes a day to make any alterations to the course to optimize it for drifting. The best tracks provide a variety of turns at odd points, rather than the NASCAR-style banked oval with long straightaways connecting two big curves. The cars slide sideways through curves and come within millimeters of touching, sometimes even bumping into each other.

With engines revving and skilled drivers gyrating around curves just milliseconds away from a catastrophic spin out, the competitions are adrenaline on wheels. Whether you want to spectate or try your hand at kitting out your own vehicle, consult the racing schedule to find an event near you.

Check out all the racing engines products available on NAPA Online, or trust one of our 17,000 NAPA AutoCare locations for routine maintenance and repairs. For more information on Formula D racing, chat with a knowledgeable expert at your local NAPA AUTO PARTS store.

NAPA Know How Blog What is Formula D?