Although he won the pole award in the No. 16 NAPA AUTO PARTS Toyota Camry on Saturday, he appeared content to let his competition set the pace of the race. He stayed within sight of the lead and then made his charge to the front in the closing laps.

“We struggled a little bit this weekend, but the entire Bill McAnally Racing team fought through it all and worked as hard as they could,” Gilliland said. “We knew if we saved enough tires, we would be in a good spot there and it all worked out. It was (a matter of) not driving it in too hard and making sure it was straight coming off the corner and not getting on the right rear tire and spinning it.”

Gilliland was thrilled to set the record in winning his first three career races in the K&N Pro Series. 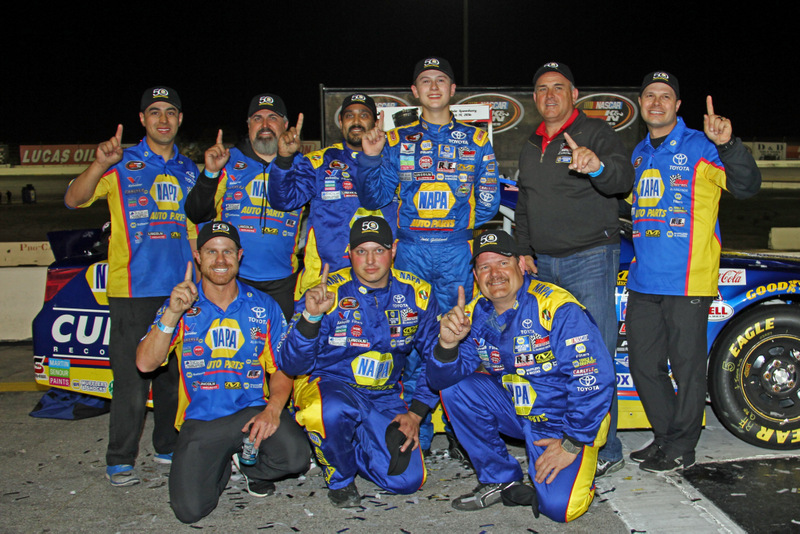 “It’s awesome,” he said. “To have great supporters like NAPA, Toyota, and Frontline Enterprises is what makes this all happen. I can’t thank them enough.”

“Our NAPA Filters Toyota was solid all weekend long,” said Eggleston of Erie, Colorado. “Nevertheless, we never had a great short-run car. It definitely showed in qualifying, but I knew we had a better race car than that.

“I think a third-place podium finish is a good result to get the season kicked off and going,” said the defending champion, who won last year’s series race at Irwindale. “It was great racing. I think we put a heck of a show on for the fans.”

Herbst came home sixth in his series debut as he launched his rookie season. The 17-year-old from Las Vegas had begun the year with a ninth-place finish in the K&N East season opener last month.

Landauer was eighth in making her first start in K&N Pro Series competition, meanwhile. The 24-year-old from New York is also embarking on her rookie season this year.

Some of the past series winners at Irwindale Speedway attended the event. They included Brendan Gaughan, David Gilliland, and Austin Cameron. Other guests at the event included NASCAR Sprint Cup Series drivers Chase Elliott, David Ragan, and Matt DiBenedetto.

The weekend festivities at Irwindale included a visit by Eggleston and Landauer to a local grade school Friday morning, as they met with the student body of nearly 700 kids at Emperor Elementary School.

The next event on the K&N Pro Series West schedule will be the NAPA AUTO PARTS 150 at Kern County Raceway Park near Bakersfield, California on April 2.