The words “blown head gasket” strike fear into the heart of almost any vehicle owner. While not as horrifying as “blown engine”, a blown head gasket typically means a very expensive repair bill is about to come your way. It might even be the deciding factor as to whether you keep a vehicle or simply buy another one. But a failed cylinder head gasket doesn’t have to mean the end of the road for your trusty ride. Let’s look at what a head gasket repair takes.

How To Test For A Bad Head Gasket 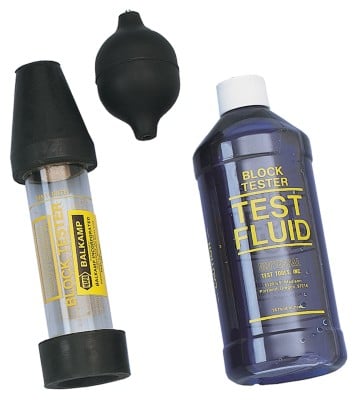 To test for coolant in the oil simply remove the oil dipstick and look at the end. If it looks like chocolate milk, you have a problem. If you don’t have a dipstick you will need to drain the oil into a pan to look at it.

How To Fix A Blown Head Gasket

Let’s just go ahead and get this out of the way. Replacing a failed cylinder head gasket is not a quick repair and will require disassembling the engine down to the engine block. Whether you decide to DIY or let your local NAPA Auto Care handle the job (and it will indeed be quite a job) you need to be prepared. There will also be several “might as well” items that you will want to do while you are in there. Might as well do the timing belt/chain guides, water pump, or anything else that is questionable that lives deep in the engine. Got a V6 or a V8? Might as well do both sides even if only one cylinder head gasket is leaking. At this point you may consider getting a complete cylinder head gasket set that has all the bits you will need for the job.

Now that we set the expectations, let’s take a look at the general steps required to fix a blown head gasket. For a complicated repair like this we suggest taking lots of photos to reference later when it is time to reassemble.

Reassembly is typically the reverse of the removal but with a few extra steps.

You can now see why this is typically a major repair job regardless of who does the wrenching. When you see a quote for how much to fix a blown head gasket, think about the entire process involved.

Is There A Quick Head Gasket Fix?

While a traditional head gasket replacement is the best method for a repair, there is an alternative. You may be wondering how to fix a blown head gasket without replacing it. Years ago some very creative scientists developed stop leak products that are designed to re-seal a leaking head gasket. While they may vary in their packaging or chemistry, most of these products are designed to be added to the cooling system. Each product is different and it is very important to read the instructions in full before using any of them. Some may be able to be added directly to the cooling system with no other steps, while others may require flushing and filling the cooling system. They are also only designed to fix a head gasket leak where gasses from the combustion chamber are entering the cooling system. If your oil looks like a chocolate milkshake or there is coolant in the oil, stop leak won’t help you. Head gasket stop leak can’t fix major leaks like those found on early Cadillac Northstar V8 engines (which actually strip the cylinder head bolt hole threads). If the cylinder head has warped or otherwise separated from the engine block, stop leak may not work.

A leaking cylinder head gasket doesn’t have to mean the end of your vehicle’s days on the open road. But it also can’t be ignored. Letting a head gasket leak continue will eventually destroy your engine, there is no question. So give your repair options careful consideration, especially if you had planned on keeping the vehicle for a long time. A vehicle in otherwise great shape may very well be worth repairing for many more miles of service. Check out all the engine parts available on NAPAonline or trust one of our 17,000 NAPA Auto Care locations for routine maintenance and repairs. For more information on what causes a blown head gasket, chat with a knowledgeable expert at your local NAPA Auto Parts  store.

NAPA Know How Blog How To Fix A Blown Head Gasket